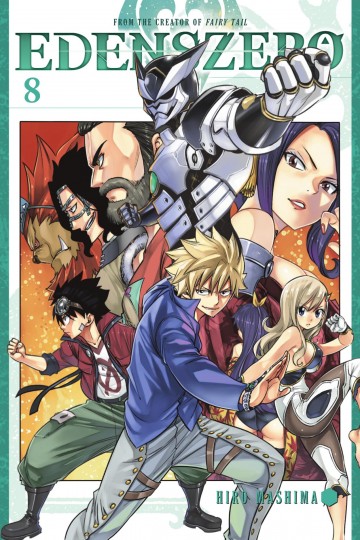 When she finds out that Valkyrie, her beloved mentor, is dead, Homura is shaken to her core. Vowing to avenge this death, Homura sets out–only to learn that the one behind the murder is none other than her own mother, Madame Kurenai. Now the time has come for the labor district, Rebecca, and Shiki to revolt against Kurenai’s tyrannical reign. But the leader of Sun Jewel has powerful warriors at her command that may very soon outnumber the rebels… In these troubled times, a new hero arises: The Arsenal.

This digital comic is available in english version. The following reading modes are available with the izneo reader:
EDENS ZERO- Volume 8 - EDENS ZERO 8 - Hiro Mashima - to read online on izneo or download on your iOS and Android tablet or smartphone.

Read the album
Add to cart
Added to your cart
V.11 - EDENS ZERO
(0)
$10.99
History is repeating itself, but thanks to Rebecca's time jump, the Edens Zero crew is prepared. A four-on-four battle breaks out between the Element 4 and the Four Shining Stars as Shiki and Rebecca head to Drakken's lair to save Labilia. There they are met by an unexpected ally: Guild Master Noah.

Read the album
Add to cart
Added to your cart
V.1 - EDENS ZERO
(3)
$7.99
EDENS ZERO- Volume 8 - EDENS ZERO 8 - Hiro Mashima - to read online on izneo or download on your iOS and Android tablet or smartphone.
New

Add to cart
Added to your cart
C.151 - EDENS ZERO
(0)
$0.99
At Granbell Kingdom, an abandoned amusement park, Shiki has lived his entire life among machines. But one day, Rebecca and her cat companion Happy appear at the park’s front gates. Little do these newcomers know that this is the first human contact Granbell has had in a hundred years! As Shiki stumbles his way into making new friends, his former neighbors stir at an opportunity for a robo- rebellion…And when his old homeland becomes too dangerous, Shiki must join Rebecca and Happy on their spaceship and escape into the boundless cosmos.
New

EDENS ZERO- Volume 8 - EDENS ZERO 8 - Hiro Mashima - to read online on izneo or download on your iOS and Android tablet or smartphone.

Read the album
Add to cart
Added to your cart
V.8 - Fairy Tail: Happy's Heroic Adventure
(0)
$10.99
Marice and the MF (Marice Friends) she created with her magic were used as an energy source in the past by General Star. In her sorrow, she lost control of her magic, so they had to seal her away for a thousand years. After her revival, she was able to enjoy the peaceful paradise she always dreamed of with Happy and the MF. But then General Star traveled through space-time to capture her! Will Happy be able to save Marice and the MF?! Will he ever be able to go back home to Natsu?! Happy's Heroic Adventure in another world is finally reaching its conclusion!