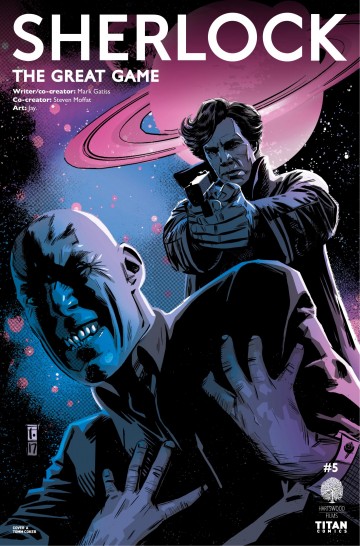 Sherlock admits defeat after failing to save the last hostage. John fears that Sherlock lacks compassion and is enjoying the deadly challenges. Shortly afterwards, the police discover a body washed ashore near Waterloo Bridge, which Sherlock immediately declares is part of the bomber’s game. He concludes that the man discovered a grave secret about a prized painting, which led to his assassination by a notorious hitman nicknamed Golem. John discovers that the victim had a passion for astronomy and, with Sherlock, they follow a trail towards a planetarium, fearing that the Golem isn’t finished.

Read the album
Add to cart
Added to your cart
V.2 - Sherlock
(0)
$13.99
“Firing on all cylinders. 10 out of 10.” – Graphic Policy Mystery and danger lurk for Holmes and Watson… A series of murders and a set of mysterious symbols spell out danger for Sherlock and John in their latest case. This manga adapts ‘The Blind Banker’, the second episode of the smash-hit Hartswood Films TV show starring Benedict Cumberbatch as Holmes and Martin Freeman as Watson. “Extremely well done, certainly for fans of Manga or Sherlock.” – Nerdspan

Read the album
Add to cart
Added to your cart
V.3 - C.6 - Sherlock
(0)
$4.99
After an intense struggle, the Golem escapes, sparing the lives of Sherlock and John. Back at the gallery, the bomber calls, using a child as hostage, and pressures Sherlock into proving that the suspicious painting was fake. The gallery curator admits the forgery and reveals that her accomplice is a person named Moriarty. John heads to where Andrew West’s body was discovered. Sherlock surprises him by revealing that he has been secretly investigating the case as well. Together they confront West’s finacee’s brother, and he confesses to accidentally killing him and stealing the missile plans. Sherlock retrieves the plans – however, he has no intention of returning them to Mycroft…