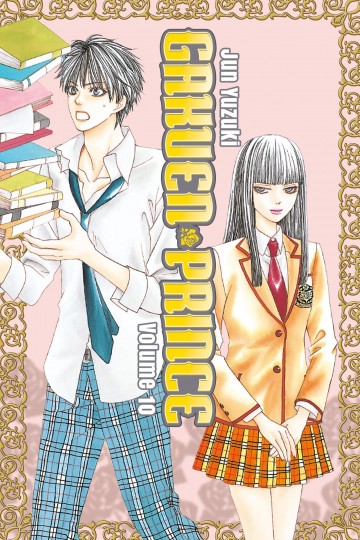 “I always thought this would happen much later.” After everything, Rise Okitsu accepts Omi Akamaru’s feelings, and the bond between them deepens as they start their first date… Fate plays a mischievous prank, and the two end up spending the night together! Meanwhile, after being dumped by Rise, Azusa Mizutani falls into the depths of despair…?! The two boys in Rise’s heart are now embarking on their own paths!

This digital comic is available in english version. The following reading modes are available with the izneo reader:
Gakuen Prince- Volume 10 - Gakuen Prince 10 - Jun Mayuzuki - to read online on izneo or download on your iOS and Android tablet or smartphone.

Read the album
Add to cart
Added to your cart
V.12 - Gakuen Prince
(0)
$10.99
“I won’t run away from my feelings anymore.” Azusa Mizutani and Rise Okitsu meet again at the student council party. In front Rise’s boyfriend, Omi Akamaru, Azusa confesses his feelings to her… Akamaru? Or Mizutani? It’s time for Rise’s final decision… which prince will she choose?

Gakuen Prince- Volume 10 - Gakuen Prince 10 - Jun Mayuzuki - to read online on izneo or download on your iOS and Android tablet or smartphone.

Read the album
Add to cart
Added to your cart
V.1 - BTL Burning Love Twin
(0)
$7.99
Nozomu is on a secret mission! After convincing his identical twin brother, Saku, to switch places for a day, Nozomu goes to his brother’s school and confronts his enemy in the classroom! Meanwhile, Saku must memorize everything about his brother’s school life and classmates so he can fit in without drawing attention to himself. Everything appears to be going alright, until Nozomu’s close friend, Yoji Osawa, starts making some more than friendly gestures toward Saku! Afraid of blowing his cover, Saku goes along with it… What could possibly go wrong?