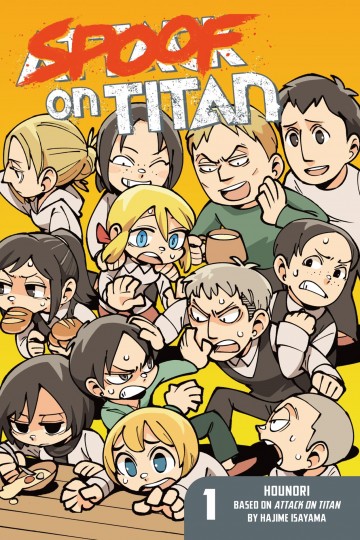 A spinoff series to the number one bestseller in Japan. Eren and Mikasa enter a new schoolTitan Junior High! However, Eren's hated Titans for yearscan he get along with his new (harmless?) classmates? Featuring all of the characters from the main series as you've never seen them before, this series is sure to delight fans of Attack on Titan with a human vs. Titan volleyball match, a Titan rock band, and much more!

This digital comic is available in english version. The following reading modes are available with the izneo reader:
Spoof on Titan- Volume 1 - Spoof on Titan 1 - hounori - to read online on izneo or download on your iOS and Android tablet or smartphone.

Read the album
Add to cart
Added to your cart
V.2 - Spoof on Titan
(0)
$9.49
The Pursuit of Wackiness -- Eren and the gang are back for one last hurrah, and they’re pulling out all the stops! How would the Survey Corps fare in space? Who’s scared of ghosts? And perhaps most importantly, why are all the guys dressing up as Historia?! Find out in this final volume of the four-panel comic strip spinoff of the hit manga Attack on Titan!

Read the album
Add to cart
Added to your cart
V.1 - Spoof on Titan
(0)
$8.99
Osamu Tezuka on izneo!
Come read the Father of Manga!