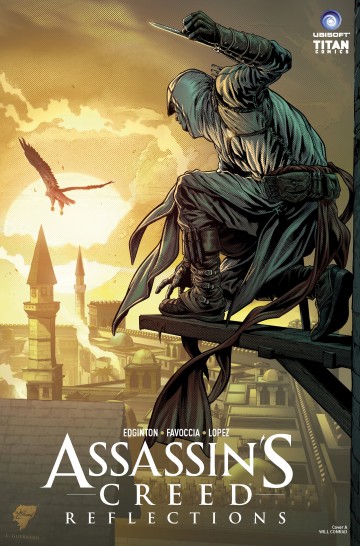 Master Templar Juhani Otso Berg faces a dilemma… Loyal to the Order, but sensing growing dissent from within, the former special-ops technician has recently adopted the mantle of The Black Cross in order to effectively root out treachery from the shadows. Utilizing Abstergo’s immense resources (and a certain genetic profile), Berg has begun to search the past exploits of the Assassin Brotherhood for alternative methods of implementing the Templar doctrine. Beginning with the legendary Assassin Ezio Auditore da Firenze, whose adventures revealed much of the Brotherhood’s stance on loyalty, Berg now sets his eye on the Ibn-La’Ahad dynasty, his search leading him to the dusty plains of Western China and the rise of the Mongol Empire.

Read the album
Add to cart
Added to your cart
V.1 - Assassin's Creed: Locus
(1)
$12.99
Truth and justice will out. Dive into the sordid underworld of Victorian London, and the memories of New Yorker, Tommy Greyling, as he teams up with Assassins Evie Frye and Henry Green to search for an ancient relic that has the potential to change the world! Written by Ian Edginton (X-Force, Scarlett Traces) and illustrated by Caspar Wijngaard (Limbo), this thrilling mini-series, spun from the Scholastic Young Adult novel series, Last Descendants, follows a brand new Assassin’s Creed adventure filled with captivating twists and turns. Collects An Assassin’s Creed Series: Last Descendants – Locus #1-4.