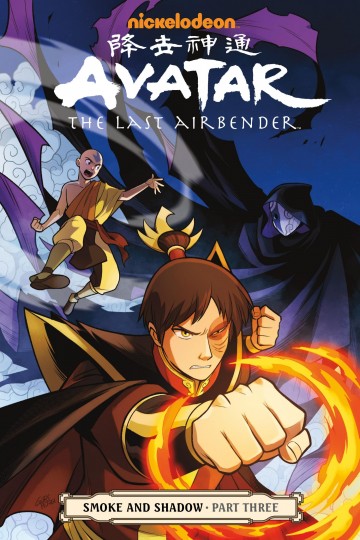 Children are disappearing in the Fire Nation capital! Avatar Aang and his friends are doing everything in their power to save them—but will it be enough? And worse, when Azula—the mad sister of Fire Lord Zuko—appears on the scene, Zuko locks down the city to catch her, igniting fear and riots in the streets! Will Zuko follow in his evil father’s footsteps in order to save those he holds dear? * The official continuation of Airbender from its creators, Michael Dante DiMartino and Bryan Konietzko!

Read the album
Add to cart
Added to your cart
V.3 - Avatar: The Last Airbender
(0)
$6.99
Fire Lord Zuko and Earth King Kuei arrive in the Southern Water Tribe amid protests of Gilak's imprisonment. While the leaders hold council to solidify Malina and Hakoda's unification plans, Gilak breaks free and leads a powerful rebellion! In the face of these two opposing tribes, Katara will have to make peace with her nostalgia and distrust to save the home she loves from being permanently torn apart. Written and drawn by the creative team behind the best- selling The Search, The Rift, and Smoke and Shadow, Gene Luen Yang and Gurihiru, in collaboration with Avatar: The Last Airbender and Legend of Korra creators Michael Dante DiMartino and Bryan Konietzko, this is the ultimate continuation of Avatar and the perfect companion to Legend of Korra!

Read the album
Add to cart
Added to your cart
Avatar: The Last Airbender - The Art of the Animated Series
(0)
$15.99
Since its debut in 2005, Avatar: The Last Airbender has remained one of Nickelodeon's most talked about and highest-rated animated series to date, and it's not too hard to see why... Not only does it offer an epic storyline, engaging characters, action, adventure, and a powerful message about the importance of hope in a world long- besieged by war, all the while serving up top-notch entertainment. It's also beautifully executed, a stunning masterpiece of animated storytelling that harmonizes Western influences with aesthetic inspiration drawn from a diverse array of cultures, including those of China, Japan, India, and the Inuit. An unprecedented look at the concept, design, and production art behind this smash-hit series, Avatar: The Last Airbender, The Art of the Animated Series chronicles the show's development — from the very first sketch through to the series finale and beyond! — along with behind-the-scenes commentary from series creators Bryan Konietzko and Michael Dante DiMartino. * Featuring hundreds of images, most of which Nickelodeon has never released to the public!

Read the album
Add to cart
Added to your cart
V.4 - The Legend of Korra: The Art of the Animated Series Book
(0)
$16.99
Go behind the scenes and uncover the phenomenal never-before-seen artwork that went into creating this beloved series’ final season! Captions from series creators Michael Dante DiMartino and Bryan Konietzko will give you an exclusive look at every aspect of the show; it’s like having your own backstage pass to The Legend of Korra Book Four: Balance! *Never-before-seen artwork from season 4 of Korra! “Strong characters, compelling storylines, heartfelt humor, gorgeous animation—this show had it all.”—IGN