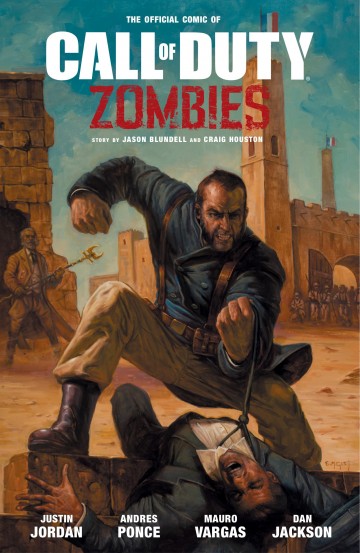 A prequel introducing the cast of characters from this year's Call of Duty®: Zombies game mode in 2018's Call of Duty®: Black Ops IV. Collects Issues 1-4. First, the year is 1910, the place is Morocco, and there is a job that needs doing. The man to do it? A commanding officer in the French Foreign Legion. The prize? An artifact of unspeakable power. The price? More than he bargained for. Second, tempted by the possibility of discovering an ancient depository of humanity's greatest secrets, a brilliant chemist with a troubled past travels across the globe in search of forbidden knowledge. Unfortunately, his past is coming too. Third, amidst the throes of the Mexican Revolution, an international spy and legendary lover finds himself drawn into another conflict--one that may decide the fate of humanity itself. Finally, pieces are set in motion that shadowy forces have long been putting into place. They believe what comes next cannot be stopped. Little do they know an unlikely group is about to be assembled, by a woman they should not have crossed.

Read the album
Add to cart
Added to your cart
Call of Duty: Zombies
(1)
$19.99
Join Stuhlinger, Misty, Russman, and Marlton as they fight for survival against the undead horde. The Tranzit crew, last seen in the "Buried" map, are trapped on a deeply unstable and fractured future Earth. The Call of Duty®: Zombies miniseries delves into these characters' backstories, providing a crucial piece of the Zombies puzzle. See what happens between the maps as the Tranzit crew fights to escape Maxis' apocalyptic wasteland. Writer Justin Jordan (The Strange Talent of Luther Strode) joins Jason Blundell and Craig Houston to expand the Zombies story, and artist Jonathan Wayshak (Devolution), with Dan Jackson, brings the world to life in a new medium! This volume collects issues #1-#6 of the Dark Horse Comics series. A must-read for fans of Call of Duty®: Zombies The Call of Duty ®: Zombies comics show crucial never-before-seen moments in the Zombies timeline! Nonstop action and a compelling mystery mean even non-gamers can enjoy the comics. Covers by superstar artist Simon Bisley!
#StayAtHome

Read the album
Add to cart
Added to your cart
Planet of the Apes/Green Lantern
(0)
$9.99
Cornelius discovers an ancient ring in the Forbidden Zone and unlocks a power that echoes across universes. With the Green Lantern Corps, led by Hal Jordan, racing to get to the source of this power before Sinestro can get his hands on it, they will discover a truth about the Guardians that will change them forever on THE PLANET OF THE APES. From writer Robbie Thompson (Silk; Spidey; Supernatural), Justin Jordan (Green Lantern: New Guardians, Luther Strode) and artist Barnaby Bagenda (Omega Men) comes the war of the Green Lanterns on the Planet of the Apes!