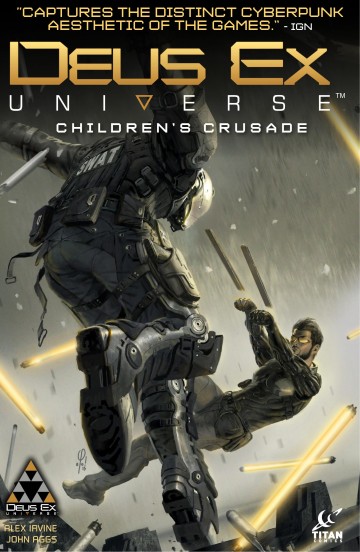 WE ARE NOT OBSOLETE With society still reeling from the Aug incident – the event which caused millions of Augmented to attack their ‘natural’ counterparts – anti-Aug sentiment is at an all-time high. Now viewed as a threat to humanity, transhumans have been corralled into slum-like ghettos, leading to a rise in terrorist activity. In the city of Prague, Adam Jensen readies for his first mission with Task Force 29, an Interpol-funded counterterrorism unit. But being augmented himself how will the agent handle himself when faced with the grim reality of a mechanical apartheid? “Captures the distinct cyberpunk aesthetic of the games.” - IGN “Simply stunning.” – Flickering Myth “Makes for some great social commentary.” Outright Geekery

Read the album
Add to cart
Added to your cart
C.5 - Deus Ex: Children's Crusade
(0)
$3.99
As TF29 heads into the Glasshutte for a final confrontation with the pro-aug forces, two questions remain in Adam Jensen's mind: what will this mean for the future of augmentation and will the real conspirators ever come to light?

Read the album
Add to cart
Added to your cart
Halo: Collateral Damage
(0)
$9.99
The Master Chief and Blue Team are deployed by the UNSC to Alpha Corvi II, a precarious human colony world, seeking to halt the Covenant's efforts to uncover something hidden below the planet's surface. Before they were legends in the Halo universe, they were soldiers on the front lines. Alpha Corvi II is under a full-scale attack by humanity's newfound enemy, the Covenant. While most of the UNSC's forces have been ordered to defend the colony's primary city, a Covenant strike team has infiltrated a small mining settlement. With resources limited, the UNSC sends the Spartans--the Master Chief and Blue Team--to neutralize the alien threat and discover what they're after. The Spartan strike team quickly finds out that they will have to rely on each other and a small cadre of human rebels in order to survive and complete their mission. Writer Alex Irvine (Halo: Rise of Atriox, Halo: Tales From Slipspace) and artist Dave Crosland (Halo: Tales From Slipspace) lead us on a thrilling mission from the early days of the three-decade long Covenant War.