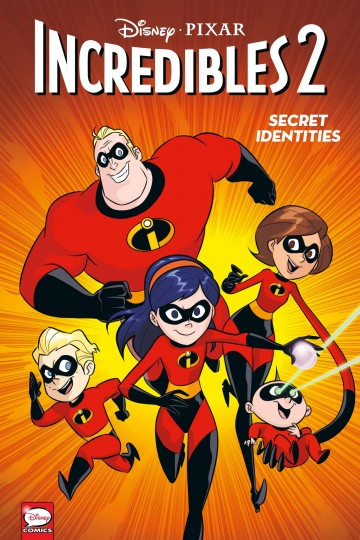 Unmask the Incredibles and reveal the true meaning behind being a family, a friend, and a Super . . . Violet is having a difficult time at school--between making new friends, getting good grades, and preparing for the next bad guy's attack--Violet can't quite figure out where she fits in. When she meets a new girl at school--an outcast with powers just like her, they develop an instant bond. But her new friend is hiding more than her powers . . . When she asks Violet to keep a secret, Violet learns that right and wrong isn't as simple as it seems. Growing up just got a lot tougher . . . Partner up with Violet and the Incredibles in this force-field of adventure and excitement by writer Christos Gage (Buffy the Vampire Slayer and Amazing Spider-Man)! Collects Disney•PIXAR The Incredibles 2: Secret Identities #1-#3.

Read the album
Add to cart
Added to your cart
Ninja-K Deluxe Edition HC
(0)
$49.99
One by one, the operatives of MI-6’s covert “Ninja Programme” are being murdered by an unseen threat. Ninjak must confront the bloodstained legacy that spawned him…before his own name gets crossed off the list… The circle around Valiant’s deadliest superspy closes in the complete deluxe edition hardcover of the series Nerdist calls, “one hell of a ride”! Collecting NINJA-K #1–14, “Prelude to Ninja-K” from NINJAK #0, and more than 20+ pages of rarely seen process art, designs and extras!

Read the album
Add to cart
Added to your cart
Rom Vs. Transformers Shining Armor
(0)
$8.99