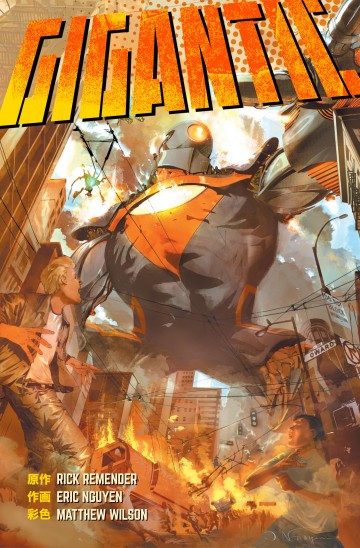 Critically acclaimed writer Rick Remender (Fear Agent, The End League) teamed up with groundbreaking artist Eric Nguyen (X-Men, Sandman Mystery Theatre) in the merging of big, visually exciting art with a story examining America's consumer-based culture and now this unique and electrifying collection is available in a prestige format for the first time! Who is this invader demolishing San Francisco? Why is he being attacked by strange alien beings? And why is he so GIGANTIC? It was a beautiful spring day in downtown San Francisco before a gigantic armored alien appeared from out of nowhere and began smashing things all to hell! A twist on The Truman Show, Gigantic focuses on a brainwashed alien superhero deposited on Earth to be the spotlight of an intrusive, around-the-clock television program being filmed without his knowledge.

Read the album
Add to cart
Added to your cart
Night Mary
(0)
$8.99
Meet Mary Specter, a misunderstood teenage girl trained to be a lucid dreamer. Mary's father runs a sleep disorder clinic where Mary enters the ghastly dreams of severely disturbed people in an attempt to help them. When a patient is revealed to be a serial killer, the nightmare world and the waking one become intertwined, putting Mary in real jeopardy. Set in a world where the boundaries between dreams and reality are tenuous, Night Mary, courtesy of Rick Remender and Kieron Dwyer (Remains), is a very dark and terrifying trip into psychological horror.

Read the album
Add to cart
Added to your cart
The End League Library Edition
(0)
$27.39