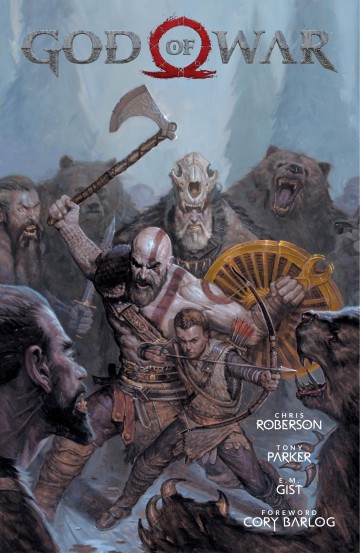 “Every day, I search for a challenge. Always there is one to be found. In this way, I test myself. I do not fight. They attack. But I refuse to fight back. I control my rage. It does not control me. But today I failed. I lost the only battle that truly matters, against myself. But I lost control. And my rage triumphed. In the end, the rage always triumphs.” ***** Kratos Godslayer used to be a Spartian general, a military genius as well as a bloodthirsty brute. Hitman for and at war against the Greek gods in the first opus, wandering through Midgard in the second, Kratos now lives a quiet life with his wife and son Atreus in the Norse wilds, testing his rage until he controls it, or fails to. Until the day he tries to save a man from a bear-man, a berserker, whose clan threatens his family and sanctity of his home. Kratos has no choice but to go on a hunt with his mild-mannered son to find the Berkserkers, once the scourges of the earth. They draw their strength and power from animal spirits, which they have enshrined in a bear-looking totem. Their rage fuels the faith and their fury feeds their strength. But their fury deprives them of the ability to make wise choices. Not unlike Kratos who will need to face them as a man, capable of reason and wisdom. If he fights the monsters on their own terms, he is sure to lose.

Chris Roberson, Tony Parker and Benjamin Viette take on a big challenge. The last episode of the saga released on PS4 in 2018 redefined the saga from the ground-up with a never-ending sequence shot. It gave a 13 years old franchise a welcome freshness. This comic needed something special to be in line with this change. If it’ll probably be fine with some hardcore fan, the general value of this title can’t keep up, unfortunately. We follow Kratos having doubt about his rage and the way to control it. Or exactly what players have liked in each and every episode of the video game. And everything is about that. From Kratos to the people he’ll meet to the bad guys, rage is there, in every page and every sentence. Going opposite to the video game, why not. But here, the writing is not particularly great or deep. And it feels like something that they want us to believe even if it sucks or doesn’t make sense. Kratos thoughts doesn’t give much to the character and the subject is always… the same. Fighting is the central piece of God of War. And it’s far from being great here. The technical side is ok but this part feels underwhelming, to say the least. Where is the over-the-top action that we learned to love? Quick to read and quick to forget, this will probably satisfy people who can’t prevent themselves from reading every comic out there and repeat any episode of the franchise, again and again. 3 on 5 for a very mild Kratos.

The God of War takes on the world of Norse gods, starting with a cult of bear berserkers! Kratos, God of War, has returned! His war on the gods of Olympus long past, Kratos builds a new life for himself in the remote Norse wilds. Seeking to put the rage that defined most of his life behind him, Kratos inadvertently sparks a feud with a mysterious cult of berserkers after attempting to save a stranger being mauled by a monstrous bear. But for the former Ghost of Sparta, no good deed goes unpunished. This collection of pulse-pounding skirmishes includes God of War #0-#4.

Continue summary
God of War- Volume 1 - God of War - Chris Roberson - to read online on izneo or download on your iOS and Android tablet or smartphone.

Read the album
Add to cart
Added to your cart
V.2 - God of War
(0)
$11.99
Can a man ever be free of his past? Can the tides of time ever wash away the bloody sands of sin? Or do transpired trespasses permanently and inescapably stain one’s soul? After conquering Zeus and thwarting Athena, Kratos believes himself to be finally free from his bondage. He sets sail for the desert in an attempt to distance himself from his home and his shame only to find his rage and guilt follow close behind. Kratos rages against the one foe that has proven to be unconquerable—himself. But a war against oneself is unwinnable, and only invites madness. Collects God of War: Fallen God #1–#4.
Become a super reader
Write reviews and get comics for free!

God of War- Volume 1 - God of War - Chris Roberson - to read online on izneo or download on your iOS and Android tablet or smartphone.
New

Read the album
Add to cart
Added to your cart
V.2 - Witchfinder
(0)
$14.99
Collect the occult adventures of Sir Edward Grey, otherwise known as Her Majesty’s Witchfinder! Discover a nest of vampires, brave a technological “gate” to another realm, and track down the truth behind Jack the Ripper in this collection of three intense adventures of Sir Edward Grey. As the Queen’s personal “Witchfinder,” Grey continues to pursue the occult goings on in London and beyond. But this time the events he encounters—and the things he learns—will lead him to question his very future. Complete your Witchfinder omnibus library with this second volume, featuring the writing of Mike Mignola and Chris Roberson, with art from Ben Stenbeck, D’Israeli, and Christopher Mitten and stunning colors from Michelle Madsen and Dave Stewart. Collects Witchfinder TPB volumes 4-6.