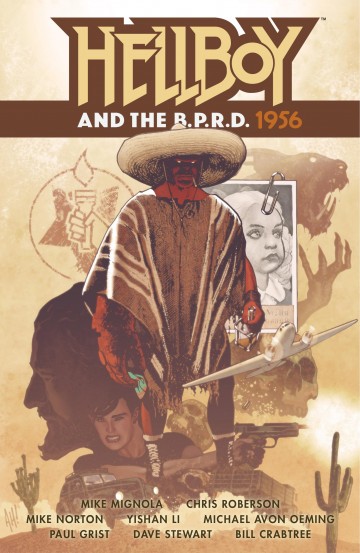 Follow Hellboy's adventures with the B.P.R.D. before Seed of Destruction! Pressure is mounting within the Bureau for Paranormal Research and Defense to uncover the Soviets' secret plans for recovered Nazi occult weapons. But a suspicious cover-up leads one agent off the radar in search of answers. meanwhile, demonic Soviet occult leader Varvara pushes her team to follow her own whims, and Hellboy is sent on the mission that led to his infamous misadventures in Mexico. But even more clandestine plots are at work--both inside the B.P.R.D. and out! This volume collects Hellboy and the B.P.R.D.: 1956 issues #1-#5, the one-shot Hellboy vs. Lobster Johnson: The Ring of Death, and bonus sketchbook material. Joining Mike Mignola and Chris Roberson, three stellar artists (Yishan Li of Buffy: The High School Years, Michael Avon Oeming of Attack on Titan, and Mike Norton of Battlepug and Revival) follow three adrenaline-fueled storylines that intertwine toward an explosive finale! Also includes the double- barreled one-shot featuring Hellboy as a villain in a Lobster Johnson luchador movie, with art by Mike Norton and Paul Grist! Collects Hellboy and the B.P.R.D.: 1956 issues #1-#5.

Read the album
Add to cart
Added to your cart
V.12 - Hellboy
(0)
$16.29
Hellboy cuts a deal with the devious Baba Yaga that may secure the survival of mankind in this climactic follow-up to 2009's lauded Hellboy: The Wild Hunt. But when war ensues between the forces of good and evil, Hellboy must finally confront the Queen of Blood in a battle that will change the fate of the world! Collects Hellboy: The Storm #1-#3 and Hellboy: The Fury #1-#3. Mike Mignola and Duncan Fegredo conclude their epic collaboration that began in 2007's Darkness Calls—a saga that changes everything for Hellboy! • R.I.P. Hellboy 1944-2011

Read the album
Add to cart
Added to your cart
Hellboy: House of The Living Dead
(1)
$10.45
Devastated over the loss of his luchador comrade to vampires, Hellboy lingers in Mexican bars until he's invited to participate in the ultimate wrestling match with a vicious Frankenstein monster! * Eisner-winning duo Mike Mignola and Richard Corben reunite! An original graphic novel in hardcover!

Read the album
Add to cart
Added to your cart
Hellboy: The Midnight Circus
(1)
$12.29

Read the album
Add to cart
Added to your cart
Hellboy and the B.P.R.D.: The Beast of Vargu and Others
(0)
$11.99
#StayAtHome

Read the album
Add to cart
Added to your cart
V.2 - Baltimore
(1)
$14.99
Lord Baltimore's quest for vengeance against the Red King escalates in the second half of the Baltimore saga, which includes a new bonus story with art by Ben Stenbeck! Finally armed with the identity of the being responsible for the vampire plague, Baltimore and his band of allies take on the evil around them with a new fervor. Enemies old and new, desperate battles, and strange horror await the reader as they follow Baltimore toward his ultimate destiny. From writers Mike Mignola and Christopher Golden, with art by Ben Stenbeck (Hellboy, Koshchei the Deathless) and Peter Bergting (Joe Golem: Occult Detective, The Untamed) comes the culmination of the Baltimore series, published for the first time in an omnibus format. Collects Baltimore: The Witch of Harju #1-#3, Baltimore: The Wolf and the Apostle #1-#2, Baltimore: The Cult of the Red King #1-#5, Baltimore: Empty Graves #1-#5, and Baltimore: The Red Kingdom #1-#5.

Read the album
Add to cart
Added to your cart
Our Encounters with Evil: Adventures of Professor J.T. Meinhardt and His Assistant Mr. Knox
(1)
$10.99

Read the album
Add to cart
Added to your cart
Crimson Lotus
(1)
$13.99
eazyComics