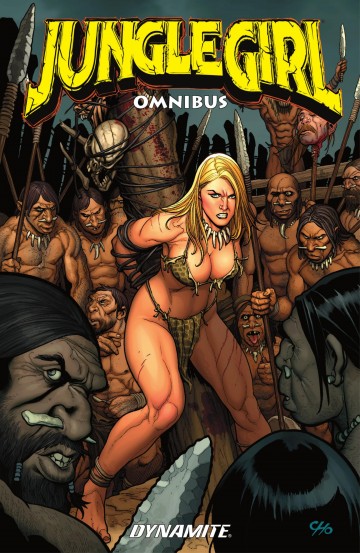 Dynamite proudly presents Frank Cho's Jungle Girl! Overseen by co- writer and artist Frank Cho and infused the issue with everything Cho fans want to see — beautiful women, thrilling adventures, and, of course, dinosaurs — Jungle Girl also features Co-writer Doug Murray (Red Sonja: Queen of the Frozen Wastes, The 'Nam) who's along for the ride, as is series artist Adriano Batista (New Battlestar Galactica: Zarek, Red Sonja) as they bring the Jungle Girl to life! This Complete Omnibus features all three “Seasons” of the Jungle Girl series, collected for the first time in one book! Jana the Jungle Girl lives in a strange land – a land filled with dinosaurs, prehistoric men, and much, much more! When a group of intruders finds themselves in need, Jana races to save them, kicking off a chain of events that, with each new chapter, reveals more clues about the nature of Jana, and of the island itself!

This digital comic is available in english version. The following reading modes are available with the izneo reader:
Our "indie" publishers & authors!
A selection of independent publishing!

Read the album
Add to cart
Added to your cart
Skybourne
(0)
$23.99
Arthurian legend is alive and well in the modern world, including mythical creatures, fantastical locales, and the one true sword of the king, Excalibur. But when the evil Merlin returns to lay claim to the impossible weapon, only one man can stand in his way—the immortal Thomas Skybourne. Written and illustrated by industry legend Frank Cho (Liberty Meadows, Savage Wolverine), Skybourne is a thrilling blend of fantasy and espionage action that updates the legends of King Arthur for a modern-day reader.