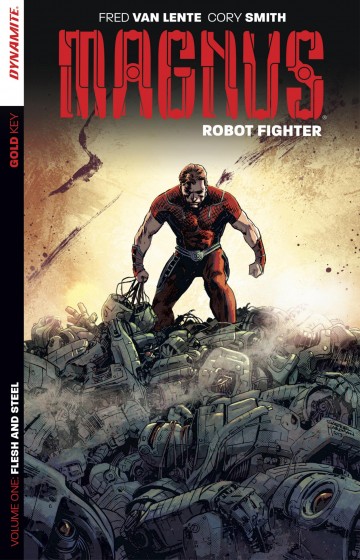 Read an excerpt
$11.99
Add to cart
Added to your cart
Included in the izneo Premium subscription
Learn more about izneo Premium

Collects Magnus: Robot Fighter #0-4! In the blink of an eye, young martial artist Magnus has everything taken from him: his father, his wife, his entire life. He's suddenly thrust into a futuristic world he doesn't understand, populated by humans and robots living together in oppression! Can Magnus fight to get his life back... and once he learns the truth about himself, will he want to? Includes the first four-issue story arc from Fred Van Lente and Cory Smith's popular comic series, plus the special Magnus: Robot Fighter #0 issue featuring story by Van Lente and artwork by Roberto Castro.

Read the album
Add to cart
Added to your cart
V.2 - Quantum and Woody
(0)
$49.99
Join Multiple Harvey Award nominee James Asmus (Thief of Thieves), New York Times best-selling writer Fred Van Lente (IVAR, TIMEWALKER), Eisner Award-winning artist Steve Lieber (Superior Foes of Spider- Man), and explosive artist Kano (Daredevil) for the next deluxe hardcover of the superhero joyride Salon calls ""one of the year's funniest comics""! Quantum and Woody are the world’s worst superhero team. Archer & Armstrong are a mismatched pair of conspiracy-busting adventurers. When a mysterious force collides with these ill-suited and irresponsible “heroes,” they’re in for a cross-country race through the darkest corners of American mythology…and all hell is bound to break loose. Can two busted pairs become four of a kind in time to defeat the Hobo King, save the day, and make it back home for happy hour? Let’s hope so...’cause these guys make a really, really bad team. (And you don’t even want to know about the Goat.) Collecting THE DELINQUENTS #1–4, QUANTUM AND WOODY MUST DIE! #1–4, VALIANT-SIZED QUANTUM AND WOODY #1, and UNITY #25 along with 20+ pages of rarely seen art and extras!

Read the album
Add to cart
Added to your cart
Weird Detective: The Stars Are Wrong
(0)
$11.99