Our Encounters with Evil 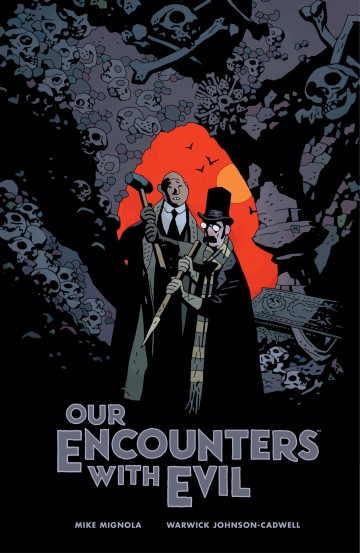 Mr. Higgins was just the beginning! Follow Professor J.T. Meinhardt and Mr. Knox as they continue their pursuit of ne'er-do-well creatures of the night! Backed by the dauntless vampire hunter Ms. Mary Van Sloan, the heroes of Mr. Higgins Comes Home pursue vampires, werewolves, and other horrors that even they are hard-put to name or explain. The only thing that's for certain is that the strange truths these adventurers uncover are seldom what they seem. From the horror-genius minds of Mike Mignola and Warwick Johnson-Cadwell comes the next installment of endearingly terrifying tales from Meinhardt, Knox, and Van Sloan. Set against the detailed and stylized background of Johnson-Cadwell's art, these stories are a striking continuation of daring occult adventure! Grab some garlic and silver bullets, and settle in for a thrilling read!

Our Encounters with Evil: Adventures of Professor J.T. Meinhardt and His Assistant Mr. Knox

Read the album
Add to cart
Added to your cart
B.P.R.D. The Devil You Know Omnibus
(0)
$14.99
The explosive conclusion to the B.P.R.D. series is collected in full! Lovecraftian monsters ravage an apocalyptic earth as the B.P.R.D. fights to save what little of humanity they can. But even Hellboy is not who he once was, and whether anyone survives Varvara and the long-awaited Ragna Rok remains to be seen. Hellboy, Abe Sapien, Liz Sherman, and other familiar faces from the B.P.R.D. gather one last time to make a final stand for humanity. Written by Mike Mignola and Scott Allie and brilliantly rendered by artists Laurence Campbell, Christopher Mitten, and Mignola himself, this book collects the end of the B.P.R.D. as we know it. Includes B.P.R.D.: The Devil You Know TPB volumes 1-3 and bonus material.