Sally's just your everyday post-apocalyptic young woman, shooting mutant fauna by day, hanging at the local bayou bar by night. She might be slightly insane, but that's all to the good after the fall of civilization. But Sally cares about one thing above all others, and that's her innocent, fair-haired boy, Tommy. When Tommy takes off on a treasure hunt to the forbidden city of New Orleans, Sally follows the boy she loves on his expedition, because hell knows he can't take care of himself...! A satirical popcorn adventure, punctuated with garish set pieces and bawdy one-liners, Sally of the Wasteland is intended for the enjoyment - and delight - of mature audiences! Collects Sally of the Wasteland 1-5 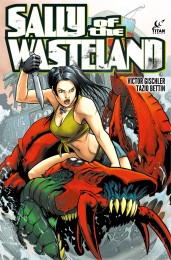 C1 Sally of the Wasteland

"The creators have set up a steamy world of sex, danger, and intrigue. And river pirates. Don't forget the river pirates." - Bloody Disgusting ""Bettin knows how to show action as well as suspense, booty as well as gore."" - Comics For Sinners She's a gloriously-grindhouse gorehound glamor girl! Southern Louisiana, 82 years after the Fall. The apocalypse has come and gone, leaving behind a withered, ravaged landscape of wreckage and mutant crawfish. Still, you gotta laugh, and Sally does, often using her beloved shotgun, Bertha, as the punchline! Inspired more by lust than common sense, and by a teenage desire to protect Tommy, the object of her desires, Sally leaves her bar job and joins the deranged crew of the Mississippi Duchess on a mission into the remains of New Orleans. Saving the remains of civilisation plays second best to keeping her sweetheart safe as our smart and sexy princess of the wild frontier runs a gauntlet of gigantic genetic freaks and roving gangs of blood- hungry barbarians! The ever-so-cute but ever-so-slightly-insane Sally is the wayward daughter of writer Victor Gischler (X-Men, Angel & Faith, Noir) and artistic up-and-comer Tazzio Bettin. This first issue in a fantastic new series proves Armageddon can be fun! 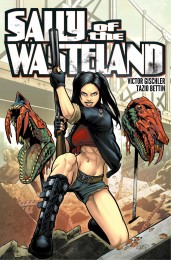 C2 Sally of the Wasteland

The hellspawn of Victor Gischler (X-Men, Angel & Faith, Noir) and newcomer Tazio Bettin, Sally is as sexy as she is psychotic. She and the crew of the Mississippi Duchess have found their trip down the mutant-infested bayous of post-apocalyptic Louisiana, interrupted by giant killer crawgators! Their ship sunk, the crew scattered, Sally is keen to find out what became of her dumb blonde himbo, Tommy. However, she has drawn the unwelcome attention of a boatload of unsavory cannibal types… 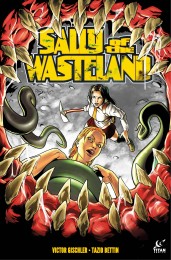 C3 Sally of the Wasteland

Mutant monsters! Crawgators! Badly dressed cannibal pirates! The dreaded lost city of New Orleans! Just some of the wondrously weird and wild obstacles that Sally, the Grindhouse Glamor Girl of post- Apocalyptic Louisiana, must face whilst on the trail of her blond bombshell wannabe boyfriend! 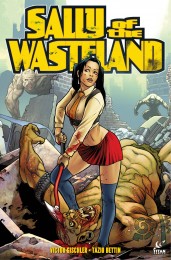 C4 Sally of the Wasteland 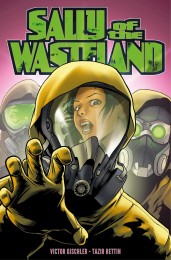 C5 Sally of the Wasteland

SHE'S A BADASS BEAUTY WITH MAYHEM ON HER MIND! Get ready for thrills, chills and overkills as Victor Gischler (X-Men, Angel & Faith, Noir) and Tazio Bettin's post-apocalyptic princess comes to the end of her neo-American odyssey. Secret societies, spooky scientists and shuddery scenarios abound as Sally's Wasteland crusade reaches its epic conclusion, but what does this mean for our butt-kicking heroine? Will she save the world and bag the dude of her dreams to boot? Find out all and more in this nail-biting final issue!