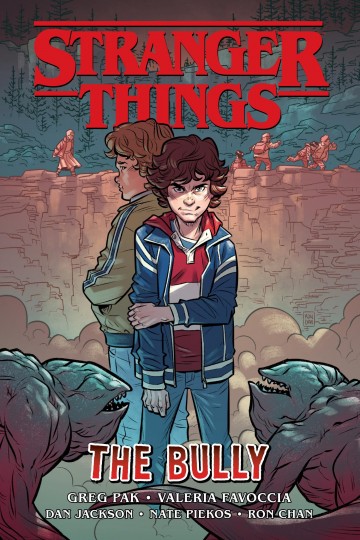 The bullies from season one of hit Netflix series try to uncover the mystery of Eleven's psychic powers in this scary all-ages comic! Troy has been having nightmares about El ever since she embarrassed him in front of the school and broke his arm in season one. Powerless and anxious, Troy is determined to prove that what happened between him and El is only some form of trickery. That is until he and James encounter demodogs! Written by best-selling author Greg Pak (Mech Cadet Yu, The Incredible Hulk, Star Wars: Age of Rebellion) and drawn by Valeria Favoccia (Assassin Creed: Reflections, Doctor Who: The Tenth Doctor).

This digital comic is available in english version. The following reading modes are available with the izneo reader:
Stranger Things- Volume 1 - Stranger Things: The Bully (Graphic Novel) - Greg Pak - to read online on izneo or download on your iOS and Android tablet or smartphone.

Read the album
Add to cart
Added to your cart
V.2 - Stranger Things
(1)
$10.99 $5.99
A prequel comic from Netflix's award-winning series, delving into the mysterious workings of Project MK Ultra and the weird science that opened the door to the Upside Down. Francine, a teenage girl with precognition, has struggled through a lifetime of exploitation: first by her parents, then by Dr. Brenner of Hawkins Laboratory. Dr. Brenner wants to harness her powers as well as those of the other gifted children that they hold captive at the lab. Wracked by increasingly disturbing visions, she sees an opportunity for her and all the children to escape. But at what cost? From the pen of Jody Houser (Faith, CMYK: Magenta, Max Ride: Ultimate Flight) and featuring art from Edgar Salazar and Keith Champagne (Black Panther), Stranger Things comics is essential reading for fans of the hit Netflix series as well as fans of the urban fantasy and horror genres in general. Collects Stranger Things: SIX issues #1-4.
eazyComics

Read the album
Add to cart
Added to your cart
Stranger Things: Zombie Boys (Graphic Novel)
(1)
$6.99 $3.99
Following the events of season one of Netflix's pop-culture sensation Stranger Things, our main characters struggle with returning to normal life after overcoming supernatural horror. School is back in session in the normally quiet town of Hawkins, Indiana. Mike, Lucas, Dustin, and Will are still grappling with the traumatic encounters with the Demogorgon and the Upside Down in season one of the hit Netflix series. As tensions rise and fractures begin to form in the group, a new kid shows up to AV club with a Betamax Camcorder and an idea. The new Spielberg-wannabe friend, Joey Kim, wants to make a horror movie about a local legend, but when he sees Will's drawings, he discovers that his new friends are local legends. Written by best-selling author Greg Pak (Mech Cadet Yu, The Incredible Hulk, Star Wars: Age of Rebellion) and drawn by Valeria Favoccia (Assassin Creed: Reflections, Doctor Who: The Tenth Doctor).

Read the album
Add to cart
Added to your cart
Firefly: Return to Earth That Was Vol. 1 (Book 8)
(0)
$19.99
NEW CHARACTERS! NEW ENEMIES! A NEW ERA STARTS HERE! For the FIRST TIME, it’s the most-demanded Firefly story ever, as the series jumps forward in time after the battle with the Reavers that left Wash & Book dead. Serenity soars again, with Kaylee captaining a crew including River, Jayne and the bandit Leonard Chang-Benitez. But they’ll soon find themselves drawn into a shocking conflict that means Zoe - along with her toddler Emma - and old friends must rejoin the crew...except for Mal Reynolds. The superstar creative team of Greg Pak (Star Wars), Pius Bak and Ethan Young send Serenity off on the last mission they ever expected, one that will bring them to the EARTH THAT WAS for the first time in Firefly history!