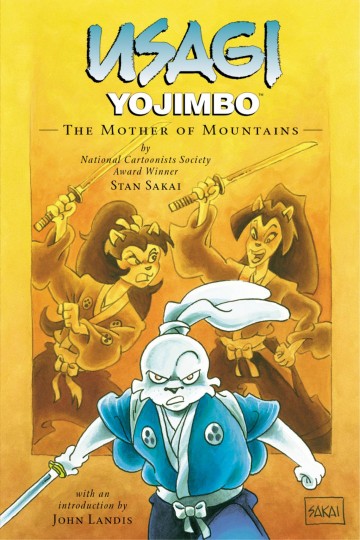 Anotsu Kagehisa, master swordsman and leader of the rogue Itto-ryu dojo, has sheathed his blade for the moment to join in marriage with the daughter of yet another dojo soon to be brought under his dark wing. But for a man of action, the formal traditions of feudal Japan can be just as tense and fraught with hidden agendas as the battlefield. And while Anotsu may indulge in a moment of peace, his enemies are not at rest, among them Rin, who has stalked him for years to take revenge for the murder of her parents. Anotsu had best make sure that if he stops to smell the flowers, he doesn't end up losing his head!

This digital comic is available in english version. The following reading modes are available with the izneo reader:
Usagi Yojimbo- Volume 21 - Usagi Yojimbo Volume 21 - Stan Sakai - to read online on izneo or download on your iOS and Android tablet or smartphone.

Read the album
Add to cart
Added to your cart
V.33 - Usagi Yojimbo
(0)
$12.99
Usagi and his friend Inspector Ishida join forces once again as they embark on a mission to track down and uncover the importance of a foreign book that's been at the root of many problems across the land. The daring duo, desperate to solve the mystery and restore peace, are forced to undertake unusual measures as well as enlist the help of a few surprising sources to get the information they require. Will Usagi and Ishida come out victorious or will this mystery prove too much for them to solve? Collecting a complete story arc in one place, this is the perfect jumping-on point for any fans--new or old! Collects Usagi Yojimbo: The Hidden issues #1-#7.

Read the album
Add to cart
Added to your cart
Usagi Yojimbo: Yokai
(0)
$16.29
Yokai are the monsters, demons, and spirits of Japanese folklore, such as the shape-changing kitsune, the obakeneko demon cats, and the evil oni ogres. Usagi faces all these and more when a desperate woman begs for his help in finding her kidnapped daughter. Tracing the abducted girl deep into the forest, Usagi finds it haunted by creatures of Japanese legend and discovers that they are amassing for a great raid on the countryside! Fortunately, Usagi is joined by Sasuke the Demon Queller, who is also fighting to prevent the invasion, but things aren't always as they seem — especially when dealing with the supernatural! * The rabbit ronin turned twenty- five, and Dark Horse celebrated with the first-ever Usagi Yojimbo original graphic novel, fully hand-painted, written, and lettered by creator Stan Sakai! * Completely self-contained story. * Usagi Yojimbo is a 2009 Eisner Award nominee for Best Continuing Series. First ever, full color, original story!

Read the album
Add to cart
Added to your cart
Usagi Yojimbo: 35 Years of Covers
(0)
$19.99
Want them to read?
Give them comics!