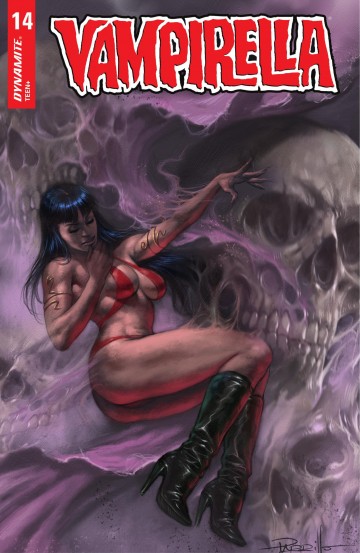 The Final Chapter of Seduction of the Innocent: Vampirella’s 50th Anniversary year concludes with a mother-daughter showdown as Vampirella confronts Lilith, the 400-year old sorceress, regarding Lilith’s obsession with her first daughter, the Warren-era original DRACULINA who’s been lost in time for centuries and may now have been incarnated as a human child who is obsessed with Vampirella and demanding to become Vampi’s acolyte.

This digital comic is available in english version. The following reading modes are available with the izneo reader:
Vampirella- Volume 1 - Vampirella (Vol 5) #14 - Christopher Priest - to read online on izneo or download on your iOS and Android tablet or smartphone.

Read the album
Add to cart
Added to your cart
V.3 - Vampirella
(0)
$9.99
Collecting the work of Mark Millar's second run on Vampirella as he takes readers on a journey to the town of "Nowheresville!" Along for the ride is Mike Mayhew and his incredibly realistic depiction of Vampirella throughout this collection. Also reprinting "Fear Of Mirrors" by John Smith and Mayhew. Featuring a cover gallery with art by Mayhew, David Finch, J.H. Williams, Bruce Timm, Greg Horn, J. Scott Campbell and more!

Read the album
Add to cart
Added to your cart
V.1 - Vampirella
(0)
$29.99
Vampirella- Volume 1 - Vampirella (Vol 5) #14 - Christopher Priest - to read online on izneo or download on your iOS and Android tablet or smartphone.

Read the album
Add to cart
Added to your cart
V.5 - C.25 - Vampirella
(0)
$3.99
RED MASS is here!!!! Can Vampirella cheat fate? That’s the question our interstellar vampire faces as she unites in unholy matrimony with the man who would be DRACULA! Yes, you read that right. Don’t miss the WEDDING OF THE CENTURY as Vampi forges a bond in blood to save the life of an innocent man. And, unlike certain other weddings, this one will actually happen! PLUS: It’s the FINAL ISSUE of the series! Yes, you read that right. CHRISTOPHER PRIEST and ERGÜN GÜNDÜZ epic 25 issue journey comics to its conclusion! (or does it?) So check the registry, clean your tuxedo and save the date, ‘cause only Vampi could end her 50th anniversary celebration with a wedding!

Read the album
Add to cart
Added to your cart
C.1 - Vampirella
(0)
$4.99
Vampirella- Volume 1 - Vampirella (Vol 5) #14 - Christopher Priest - to read online on izneo or download on your iOS and Android tablet or smartphone.

Read the album
Add to cart
Added to your cart
Vampirella (Vol 5) #0
(0)
$3.99
#0 gives us a tantalizing peak at a major disaster involving Vampirella which will have profound implications for the character going forward. We're introduced to a new cast members and get but a taste of the dynamic new creative team of Christopher Priest and Ergun Gündüz. Anything can—and does—happen!

Read the album
Pre-order
Added to your cart
Vampirella Valentines Special
(0)
$4.99
Become a super reader
Write reviews and get comics for free!

Vampirella- Volume 1 - Vampirella (Vol 5) #14 - Christopher Priest - to read online on izneo or download on your iOS and Android tablet or smartphone.
Coming soon

Read the album
Pre-order
Added to your cart
C.1 - Draculina
(0)
$3.99
One child, two destinies: who is the daughter of Lilith of Drakulon? Is she a streetwise runaway human preteen, or is she Vampirella’s deadly siren nightstalker evil twin? Two souls linked by a reality- jumping demon struggle for control of their own destiny as Draculina, Lilith’s first and most beloved daughter, is brought into Vampirella’s reality and linked to an alternate version of herself by a cursed candle which warps reality when lit, swapping Draculina with her other possible “self”—a tough homeless preteen struggling to make it on her own while being constantly drawn into Draculina’s schemes. Establishing a secret identity for herself as “River East”, high- profile socialite daughter of the missing and presumed dead Lilith Ogden Eastaughffe, Draculina presses forth with a secret, evil agenda of bloody retribution against everyone who’s ever done her wrong, with only Katie—her alt-self—standing between her and her deadly goals. Draculina is a wild, fast-paced ride through the literal reverse sensitivities of our altruistic Vampirella, brought to you by Vampi scribe Christopher Priest and Vengeance of Vampi artist Michael Sta. Maria! Buckle up for one dark, wild ride!
New