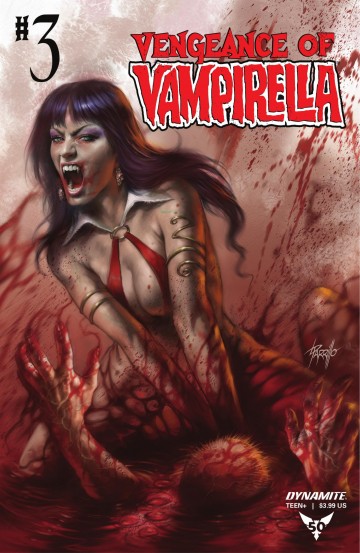 The future is Now! Tom Sniegoski’s return to Vampirella continues as the Vengeance series battles into its third issue. This issue Hemorrhage prepares to strike and is reunited with Mistress Nyx while Pendragon attempts to restore Vampirella to her former self! But, will the Daughter of Drakulon be strong enough – or willful enough – to face this new combined threat and restore order to a world gone dead!

Read the album
Add to cart
Added to your cart
V.1 - Vengeance of Vampirella
(0)
$15.99
Originally debuting in 1994, Vengeance of Vampirella portrayed a more savage and feral look at the Daughter of Drakulon. Now, for the 50th Anniversary of Vampirella, original series writer Tom Sniegoski (joined by the incredible art of Michael Sta. Maria) is back. Set 25 years after the initial series, Vampirella is Dead!? Long Live Vampirella! Humanity holds on, but barely, the playthings and slaves of a multitude of supernatural monstrosities that have made the earth their own. Mistress Nyx continues to rule the planet, her Chaos Lords reigning over the various regions of the world, but she is getting bored - There's no one to challenge her! That is, until a small, but determined rebellion finds what could be their savior or seal their doom!
Vengeance of Vampirella- Volume 1 - Vengeance of Vampirella #3 - Tom Sniegoski - to read online on izneo or download on your iOS and Android tablet or smartphone.
New

Read the album
Add to cart
Added to your cart
C.20 - Vengeance of Vampirella
(0)
$3.99
Issue #20! Writer Tom Sniegoski continues to weave a post-apocalyptic tale featuring a literal hell on earth as a reborn vampirella fights against the literal forces of chaos to save humanity from its ultimate destruction! The war between Order and Chaos has come to an end, and as the dust settles, humanity begins the process of rising from the ashes. Vampirella, forever changed, must begin a journey across the barren landscape of a world ravaged by the supernatural… But is it too late for her to regain her lost humanity?

Read the album
Add to cart
Added to your cart
C.1 - Vengeance of Vampirella
(0)
$3.99
Want them to read?
Give them comics!

Read the album
Add to cart
Added to your cart
Vampirella Valentine's Special One-Shot
(0)
$3.99
In a terrifying alternate reality, Dracula and Vampirella have wed and the world has been plunged into darkness. Humanity has become little more than cattle and Vampirella has sworn a sacred oath to her Husband and King not to fight against Vampire supremacy . . . but a rebellion is brewing in the shadows. Who is the mysterious rebel Bloodwing, and why does Dracula, and the vampire race, fear her so? A tale of Love and Death ripped from the Book of Prophecy.