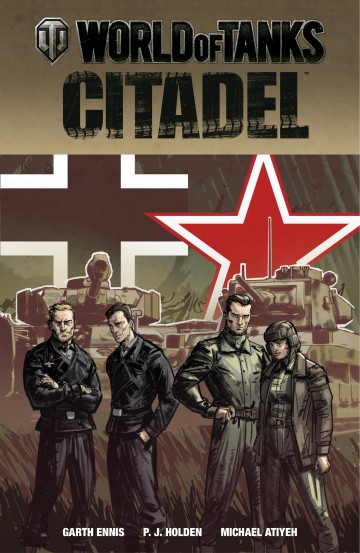 Read an excerpt
$4.99
Add to cart
Added to your cart

Inspired by the online game World of Tanks, two tank crews-one German, one Soviet-fight for survival in the mighty Battle of Kursk, in this action-packed story of armored combat in World War II. A Russian tank crew begins an unwelcome mission in a very unwelcome Matilda tank, and soon find themselves at odds with both the war and each other. Meanwhile, two German tankers find themselves deep behind enemy lines--cut off, on their own, and without their beloved Panzer IV.

Read the album
Add to cart
Added to your cart
C.3 - The Boys: Dear Becky
(0)
$3.99
Hughie fills Annie in on some of the CIA’s anti-supe tactics in the years since the Boys were last around, but she has some pressing questions of her own. As Butcher finds himself in a sticky spot with the Children of Stormfront, he realizes Becky’s influence is a good deal harder to escape than he’d thought.