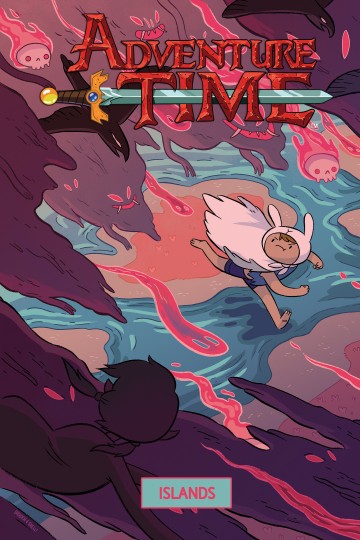 Ties into the huge Adventure Time: Islands television event, the mini-series airing on Cartoon Network this winter where Finn meets other humans and an important member of his family for the first time. Written by Islands show writer Ashly Burch, this story serves as a prequel to the television event. In the wake of the mushroom war and the vampire infestation, the remaining humans of Ooo have set sail for safer shores. Bunny Girl (aka Jo), who was Marceline's precocious young friend from the "Stakes" mini-series, is fearful of what dangers await them. Two Bread Tom, her caretaker in Marcy's absence, does his best to assuage her concerns. But after an attack from a swarm of monstrous sea creatures almost sinks the ship, Jo and the rest of the humans start to fear that it may not be safe anywhere. Luckily, they soon reach a plentiful island populated by another gregarious group of humans and attempt to build a new colony. The humans from Ooo are delighted and finally allow themselves to relax, all except for Jo, whose paranoia is as potent as ever. Her fears are confirmed when a swarm of enormous falcons descend on the settlement and snatch Jo up for dinner. Separated from her tribe, she must brave the dangers of the wild to get back to Two Bread Tom and the rest of the humans, and maybe learn a sense of self-reliance along the way.

This digital comic is available in english version. The following reading modes are available with the izneo reader:
Adventure Time- Volume 1 - Adventure Time Original Graphic Novel: Islands - Pendleton Ward - to read online on izneo or download on your iOS and Android tablet or smartphone.

Read the album
Add to cart
Added to your cart
V.75 - Adventure Time
(0)
$4.99
Follow the story of Ooo from the past, present, and future in this oversized final issue! At the wedding of Jake’s granddaughter, Jake, Finn, and the residents of Ooo reminisce on the long path that took them here, remembering friends, enemies, and those who fall somewhere in between.

Read the album
Add to cart
Added to your cart
Adventure Time: Jake
(0)
$7.99
It’s Adventure Time with Jake and you! Join Jake on the most algebraic adventure imaginable with tales all about the best canine pal you could ask for in the Land of Ooo. From teaching everyone how to cook to teaming up with Finn to fight every foe imaginable, Adventure Time: Jake collects all the stories that make the Eisner Award-winning series perfect for fans of all ages. Join an all-star cast of creators, including Christopher Hastings (Adventure Time, Gwenpool), James Asmus (The Amazing Spider-Man), Derek Fridolfs (DC Comics: Secret Hero Society), Nicole Andelfinger (Lumberjanes, Regular Show), and more in this timeless collection of Jake’s greatest Adventure Time stories.
eazyComics

Read the album
Add to cart
Added to your cart
Adventure Time: Marceline
(0)
$7.99 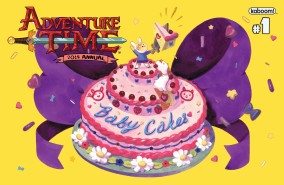 Read the album
Add to cart
Added to your cart
Adventure Time: Fionna & Cake
(0)
$7.99
Become a super reader
Write reviews and get comics for free!

Read the album
Add to cart
Added to your cart
V.5 - Adventure Time Sugary Shorts
(0)
$15.99
With brand-new, never-before-collected stories by fan-favorite Adventure Time comic book creators, Sugary Shorts packs a sweet punch of stories for everyone! From spooky tales with Marceline, to fun shenanigans with BMO, Gunter, and LSP, this selection sweet jams will satisfy all your Candy Kingdom cravings. Including stories from Meredith McClaren (Jem and the Holograms), Jeremy Sorese (Steven Universe), and Hanna K (Adventure Time animator), this volume of Sugary Shorts defies dentistry and proves you can’t have too much of a sweet thing!

Read the album
Add to cart
Added to your cart
Adventure Time: Beginning of the End
(0)
$11.99