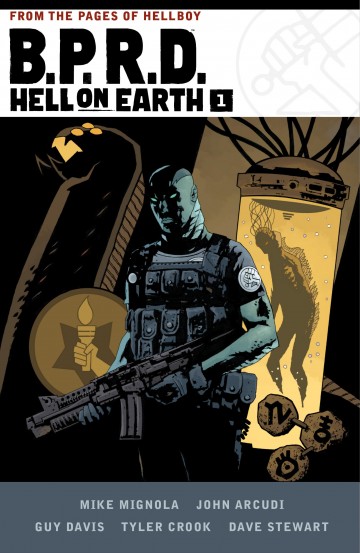 This digital comic is available in english version. The following reading modes are available with the izneo reader:
B.P.R.D.- Volume 1 - B.P.R.D. Hell on Earth Volume 1 - Mike Mignola - to read online on izneo or download on your iOS and Android tablet or smartphone.

B.P.R.D.- Volume 1 - B.P.R.D. Hell on Earth Volume 1 - Mike Mignola - to read online on izneo or download on your iOS and Android tablet or smartphone.
Coming soon

Read the album
Pre-order
Added to your cart
Tales from the Outerverse
(0)
$14.99
From the world of Baltimore and Joe Golem: Occult Detective, a new immersion into the mysteries of the Outerverse, from Hellboy creator Mike Mignola! Mythical hero Cojacaru the Skinner returns from the grave, the legendary Golem awakens, and the powerful Wyrder Imogen pursues her foes in this stunning collection of stories from Mike Mignola and Christopher Golden’s world of witches and warriors. Delve deep into the mysteries of some of the greatest heroes to challenge the Outer Dark, and gain a rare glimpse into why they fight–and where it may lead them. Award-winning writers Mignola and Golden are joined by veteran Outerverse artist Peter Bergting (Joe Golem) and colorist Michelle Madsen (Joe Golem, The Crimson Lotus) in this collection of hair-raising stories. Collects Cojacaru the Skinner #1-#2, The Golem Walks Among Us! #1-#2, & Imogen of the Wyrding Way one-shot.
Coming soon

Read the album
Pre-order
Added to your cart
The House of Lost Horizons: A Sarah Jewell Mystery
(0)
$14.99
New

Read the album
Add to cart
Added to your cart
Young Hellboy: The Hidden Land
(0)
$14.99

Read the album
Add to cart
Added to your cart
Hellboy Universe: The Secret Histories
(0)
$19.99