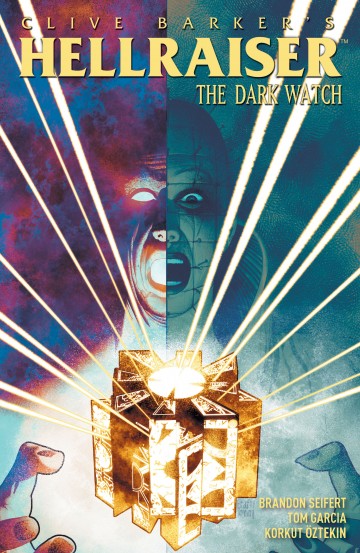 The new high priest of Hell has been revealed: Harry D'Amour. As the former detective tries to adjust to his new life, he is besieged by constant assassination attempts by other Cenobites while his former human allies fight amongst themselves. Meanwhile, as soldiers from other dimensions encroach upon the Labyrinth, D'Amour is going to have to raise an army, whether he likes it or not. Also, what does he know about the whereabouts of Kirsty Cotton and Elliott Spencer? Clive Barker, Brandon Seifert, and Tom Garcia continue their exploration of the HELLRAISER mythos.

Read the album
Add to cart
Added to your cart
V.3 - Clive Barker's Hellraiser: The Dark Watch
(0)
$7.99
The three people to serve as Pinhead-Elliott Spencer, Kirsty Cotton, and Harry D'Amour-have been thrown into various factions fighting a war between Hells that threatens to destroy all of humanity. As the divisions between dimensions dissolve, each of the Hell Popes must decide how far they are willing to go to win the war and to ensure their surivial. Clive Barker and co-writer Brandon Seifert, with artist Tom Garcia, bring this epic HELLRAISER saga to a thrilling conclusion. This volume also includes stories from HELLRAISER ANNUAL 2013, featuring work by Barker and Seifert, as well as Ben Meares, Jesus Hervas, and Janusz Ordon. Collects CLIVE BARKER'S HELLRAISER: THE DARK WATCH #9-12, and CLIVE BARKER'S HELLRAISER ANNUAL 2013.

Read the album
Add to cart
Added to your cart
V.2 - Clive Barker's Hellraiser: The Dark Watch
(0)
$7.99
A tribute to women in comics & manga!
Enjoy adventures from a female perspective!

Read the album
Add to cart
Added to your cart
Clive Barker's Hellraiser Omnibus
(1)
$19.99
Clive Barker returns to tell a new chapter in the official continuityâ€”a trajectory that will forever change the Cenobitesâ€¦ and Pinhead! Over 500 pages, collecting Clive Barkerâ€™s Hellraiser #1-20 and Clive Barkerâ€™s Hellraiser Annual #1. â€œClive Barker has managed to accomplish what may have been impossible for others. He, along with co-writer Mark Miller, has salvaged a formerly dying franchise and resuscitated it completely, taking it even beyond its former glory.â€ -Bloody Disgusting