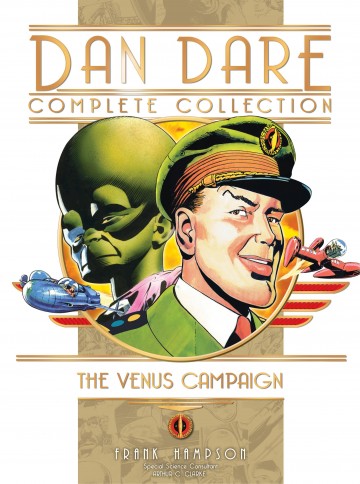 Travel back to the very beginning and relieve the first missions of Britain’s most enduring science fiction hero, Dan Dare: Pilot of the Future. Originally published in the classic British comic, Eagle (1950-1969), these two complete adventures from 1950-1952, ‘Voyage to Venus’ and ‘The Red Moon Mystery’ have been digitally remastered from the original comics and lovingly restored. This collection also includes a new introduction written by Frank Hampson’s son Peter, and includes a never-before published drawing of Dan Dare by Frank Hampson. Working as a science consultant and scriptwriter on Dan Dare from 1950-1951, science fiction legend Arthur C. Clarke supplied several scripts, concepts and notes for ‘Voyage to Venus’.

Read the album
Add to cart
Added to your cart
V.1 - C.4 - Dan Dare
(0)
$3.99
Dan Dare, the alien princess Au Taween, Digby and Professor Peabody have successfully boarded the mysterious Treen ship that had invaded the Sol system. From his moon base prision, the Mekon hacked into the Treen ship and released and incredibly virulent Treen computer virus that not only infected the ship’s computer systems but also somehow infected the alien crew itself. Unfortunately the virus also attacked Dan and the others. Dangerously sick, it was only the timely intervention of The Mekon that saved their lives when he engineered a cure for the computer virus. However, after she had recoverd and come face-to-face with The Mekon, Au Taween went beserk, snatched a guard’s gun and attempted to shoot him. Dan stepped between them and attempted to protect The Mekon, just as Au Taween preparted to fire…