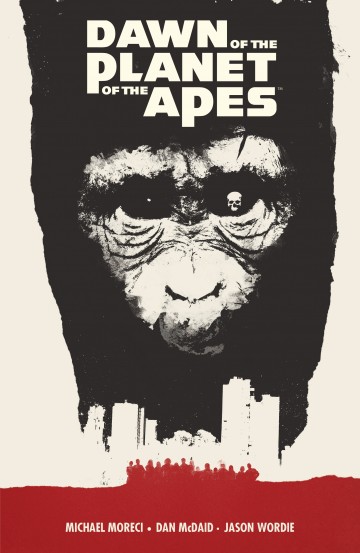 "Whatâ€™s to Love: Officially set in continuity of the new films, writer Michael Moreci (Burning Fields) and artist Dan McDaid (Mind the Gap) effectively bridge together events between Dawn of the Planet of the Apes and Rise of the Planet of the Apes, offering additional details and insight into the mindsets of apes Caesar and Koba, and human Malcolm. What It Is: Two years following the events of Rise of the Planet of the Apes, humanity has fallen, giving way to the dawn of Caesar's civilization. While the apes of the world find themselves unable to advance as a species, Caesar and Koba work tirelessly to find a way to unify them to join their cause. On the other side of the country, Malcolm must venture into the decaying Americas with his family to find a cure for the plague slowly killing his wife while world powers shift and civilizations simultaneously collapse and rise. Collects the entire six-issue miniseries. â€œA strong tale bridging the gap between the already great movies.â€ - Big Glasgow Comic Page"

Read the album
Add to cart
Added to your cart
V.6 - Dawn of the Planet of the Apes
(0)
$1.99
Final issue! Koba and Pope come face-to-face. In this ultimate fight for dominance, Koba will learn that sometimes Caesar doesn't know what is best for all apes.. Malcolm, in a race against time, must find a way to reunite mother and son before it's too late. Nothing could have prepared him for the horrors he has faced, but the little fight left in him will make sure the time he has left counts.

Read the album
Add to cart
Added to your cart
Firefly: Blue Sun Rising
(0)
$19.99
EVERYTHING CHANGES HERE. The stage is set for the final battle as the first ever Firefly event concludes, with Sheriff Mal Reynolds - yeah, he's still getting used to it too - making a choice that may cost him those he loves most, whether he knows it or not... Collects Firefly #23-24 and Firefly: Blue Sun Rising #1.