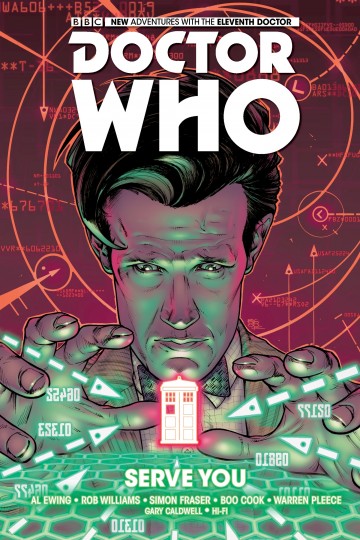 The second time-twisting collection of the sell-out smash Eleventh Doctor series from writers Al Ewing (Loki: Agent of Asgard) and Rob Williams (Ordinary), with art from the triple threat of Simon Fraser (Nikolai Dante), Boo Cook (Elephantmen) and Warren Pleece (Hellblazer, Incognegro) A threat in reverse as time inside the TARDIS flows backwards! An ancient alien war for supremacy in the sky comes to near-future London! And the machinations of SERVEYOUinc revealed, when the Doctor hits them where it hurts – their wallets! Three companions – three times the danger, three times the excitement! Experience every twist and secret reveal in the thrilling second act of The Eleventh Doctor’s first year in comics! Collects Doctor Who: The Eleventh Doctor #6-10Doctor Who, the Daleks, the Cybermen, TARDIS and all other characters and logos are trade marks of the BBC and are used under licence unless otherwise indicated.

Read the album
Add to cart
Added to your cart
V.7 - C.3 - Doctor Who: The Eleventh Doctor
(0)
$3.99
The Doctor and Alice were attacked by a rogue Silent – the Scream – whose aim was to steal the Doctor’s vast swathe of memories in order to finally be remembered… The Scream captured a Sapling, a creature whose purpose is to wipe out planets and replace with new a new form of life – a power the Scream wanted to exploit, to plant himself in the memories of an entire species. Luckily, the Doctor and Alice were able to foil the plan and escape, thanks to the timely intervention of their old friend Jones. But there’s just one snag – they now have a Sapling child aboard the TARDIS, and… while they can remember that an entity known as The Scream is after them, they can’t… quite… remember what it looks like…