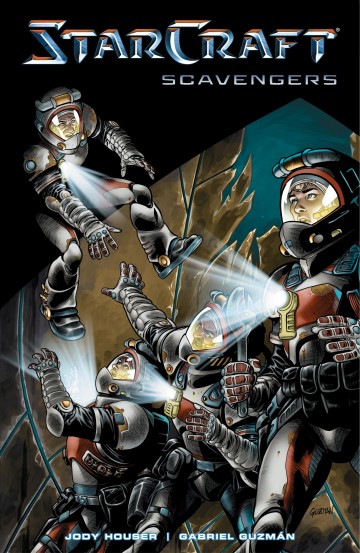 Writer Jody Houser (Mother Panic, Faith) and artist Gabriel Guzmán (Mass Effect, Star Wars) join forces for StarCraft, a new series further exploring the expansive universe of Blizzard's hit video game. Seen from the point of view of a young, inexperienced engineer, a group of terran space scavengers hope to pull off the job of their lifetimes, ignoring a recent United Earth Directorate treaty to pillage a derelict protoss ship. The scavengers' dangerous plan is compounded by the fact that the protoss ship is in a decaying orbit above a backwater planet. If their time doesn't run out and Dominion police forces don't bust them, will protoss or zerg factions in the outer rim find and execute them?

Read the album
Add to cart
Added to your cart
V.3 - StarCraft
(0)
$10.99 $5.99
Jody Houser and Gabriel Guzmán continue the tale of StarCraft: Scavengers! After surviving a murderous dark templar's rampage, a terran space engineer named Caleb is forced to do the protoss's bidding: infiltrating a munitions factory in the Umojan Protectorate to find a mysterious source of power. As the dark templar ratchets up the pressure, Caleb attempts to find solace in the friends he's made since his arrival at Spearpoint Base. But he never forgets his true objective to appease the dark templar and survive her reign of terror. Collects StarCraft: Survivors #1-4.

Read the album
Add to cart
Added to your cart
V.2 - Stranger Things
(1)
$10.99
A prequel comic from Netflix's award-winning series, delving into the mysterious workings of Project MK Ultra and the weird science that opened the door to the Upside Down. Francine, a teenage girl with precognition, has struggled through a lifetime of exploitation: first by her parents, then by Dr. Brenner of Hawkins Laboratory. Dr. Brenner wants to harness her powers as well as those of the other gifted children that they hold captive at the lab. Wracked by increasingly disturbing visions, she sees an opportunity for her and all the children to escape. But at what cost? From the pen of Jody Houser (Faith, CMYK: Magenta, Max Ride: Ultimate Flight) and featuring art from Edgar Salazar and Keith Champagne (Black Panther), Stranger Things comics is essential reading for fans of the hit Netflix series as well as fans of the urban fantasy and horror genres in general. Collects Stranger Things: SIX issues #1-4.

Read the album
Add to cart
Added to your cart
V.1 - Doctor Who: The Road To The Thirteenth Doctor
(0)
$13.99
eazyComics