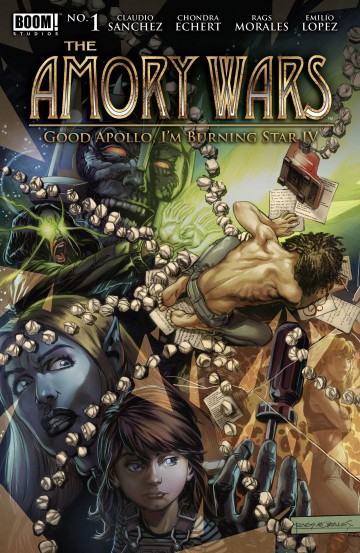 Coheed and Cambria frontman Claudio Sanchez (Translucid) and Chondra Echert team up with best-selling artist Rags Morales (Identity Crisis, Action Comics) for the long-awaited third installment of The New York Times best-selling series, The Amory Wars! The evil Wilhelm Ryan remains in power. All those around Claudio Kilgannon are now convinced he is The Crowing, but is he? Ambellina believes she and The Crowing can save Heaven's Fence rather than destroying it. But with Ryan and a new, even bigger threat looming...can they succeed?

Read the album
Add to cart
Added to your cart
V.3 - The Amory Wars: Good Apollo, I'm Burning Star IV
(0)
$11.99
The final chapter begins as the Rebel Army begins their assault on Apity Prime and Claudio and Ambellina find themselves face-to-face with Wilhelm Ryan, while the great battle outside Kalline is in full bloom, Inferno and Mayo meeting face-to-face on the battlefield. Writers Claudio Sanchez (COHEED & CAMBRIA) and Chondra Echert (Translucid) team with illustrator Rage Morales (Avengers) to conclude the latest chapter in the epic AMORY WARS saga.

Read the album
Add to cart
Added to your cart
C.12 - The Amory Wars: Good Apollo, I'm Burning Star IV
(0)
$3.99
At the front steps of House Atlantic, with the defeat of Wilhelm Ryan at his fingertips, Claudio detours into the Willing Well in search of Ambellina and comes face to face with The Creator.

Read the album
Add to cart
Added to your cart
V.3 - Dungeons & Dragons Forgotten Realms Classics
(0)
$13.99
Dungeons & Dragons: Forgotten Realms Classics continues as the Annual #1 and issues #15-18 are collected in this volume. The Annual features a new adventure as the crew of the Realms Master and the Heroes of Advanced Dungeons & Dragons team up to fight a collection of their deadliest enemies. The ongoing comics continue with the story arc, Fallen Idols, which follows the crew as they battle the wrath of the god Enoreth.

Read the album
Add to cart
Added to your cart
The Amory Wars: In Keeping Secrets of Silent Earth 3 Ultimate
(0)
$19.99