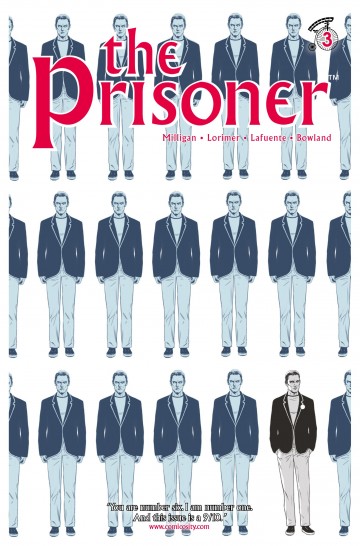 Tasked with infiltrating the mysterious Village, MI5 agent Breen achieved his objective by seemingly going rogue. Only his boss, Section, knew that it was just an act and promised to vouch for his innocence on completion of the mission. The ruse worked and Breen found himself a prisoner of the Village and was renamed Number Six. However, to his horror he discovered that Section had also been abducted, forcing Number Six to lead a daring escape, along with Section and his fellow agent and ex-lover Carey. Together they escaped The Village in a highjacked London Double Decker bus. After successfully evading a squad of Rovers, they drove through the night until the bus finally broke down, hours away from the Village. There, while eating a sandwich and staring at the stars, Number Six took out his gun, and with no warning shot himself dead.

This digital comic is available in english version. The following reading modes are available with the izneo reader:
The Prisoner- Volume 1 - The Prisoner - Volume 1 - The Uncertainty Machine - Chapter 3 - Peter Milligan - to read online on izneo or download on your iOS and Android tablet or smartphone.

Read the album
Add to cart
Added to your cart
V.2 - The Prisoner
(0)
$29.99
Welcome to the Village… Set twenty years after the final episode of The Prisoner television series, Shattered Visage follows former secret service agent Alice Drake who awakens one day to find herself washed up on the shores of THE VILLAGE, shipwrecked and marooned, following a mysterious storm. In the most derelict and deserted Village she stumbles across the original NUMBER SIX, now an old man, who is still locked into a decades-old conflict with his old nemesis NUMBER TWO. Meanwhile, back in London, conflicting intelligence agencies fight to gain control of The Village, and the deadly secret lying at its very core. Written by Dean Motter (Mr. X, Wolverine, Grendel: Red, White and Black, Will Eisner’s The Spirit and Batman: Black & White) and Mark Askwith (Batman, Justice League International), and drawn by Dean Motter. This is the critically acclaimed, officially authorized sequel to the ground-breaking classic 1960s cult TV show The Prisoner. This collection also includes an introduction written by Abigail McKern, daughter of Leo McKern, who played the role of NUMBER TWO. “Shattered Visage is a fitting sequel to The Prisoner” – Ferretbrain.com “It ‘had me at hello’ and gets my highest recommendation.” – blogintomystery.com “As good at it gets.” – the-night-cruiser-blogspot.com

Read the album
Add to cart
Added to your cart
V.1 - The Prisoner
(0)
$12.99
Become a super reader
Write reviews and get comics for free!

Read the album
Add to cart
Added to your cart
Enigma: The Definitive Edition
(0)
$14.99
Enigma is a visceral, post-modern tale of self-discovery and sexual identity told against the backdrop of outrageous superheroes and villains. Michael Smith lives a meaningless life of routine and boredom. But when the weird characters from Enigma - his favorite childhood comic book hero - seem to come to life, Michael embarks upon an increasingly obsessive crusade to uncover the incredible secret behind their improbable existence. Teaming up with Enigma's comic creator, Smith encounters an insanity-inducing psychopath, a brain-eating serial killer, a suicide-inciting Truthsayer and a teleporting model "who really sends you" as his quest uncovers shock- ing truths about his idol... and ultimately himself. With a brand-new cover by Duncan Fegredo and a treasure trove of nearly 50 pages of extras including development art, color sketches, and behind the scenes notes into the making of this celebrated, groundbreaking story. "Beautiful. Literary. Decades ahead of its time. This is the greatest adult superhero comic of the nineties. At least." -- Kieron Gillen The Wicked and the Divine