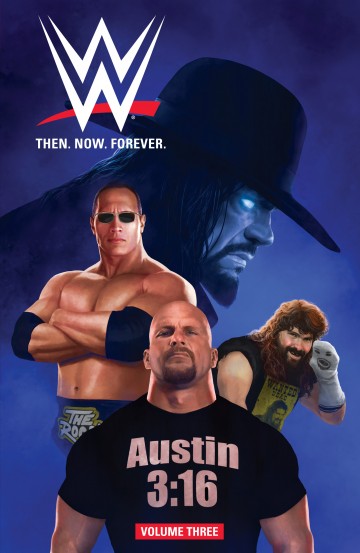 Go further than what you get to see on WWE Network. WWE: Then. Now. Forever. Volume Three brings you back to some of the most shocking moments of WWE’s past! Be there when Ricky “The Dragon” Steamboat and Randy “Macho Man” Savage lock horns at Wrestlemania III, watch The Rock and Stone Cold Steve Austin seek WWE supremacy, and go along for the ride with D-Generation X as they head down South… An all-star team of writers and artists, including Aaron Gillespie (New Challengers), Andy Belanger (Southern Cross), Kendall Goode (Maze Runner: The Death Cure) and Tini Howard (Rick & Morty), take WWE’s greatest hits to comics and invite you to take a peek behind the curtain.

Read the album
Add to cart
Added to your cart
V.24 - WWE
(0)
$3.99
AJ Styles sees a path to Wrestlemania, but must get through multiple title matches to get to his dream bout. The problem? He doesn’t have to be pinned in these matches to lose the belt...

Read the album
Add to cart
Added to your cart
WWE: The Phenomenal One
(0)
$15.99
Before he became The Face That Runs The Place, AJ Styles spent nearly twenty years traveling the world, making sacrifices, all with one goal: proving himself as the best in-ring performer, bar none. Now, for the first time ever, see how the Phenomenal One’s quest led him to WWE, and how he took the biggest stage in sports entertainment and made it his own. Dennis Hopeless (Cloak & Dagger, All-New X-Men) and illustrator Serg Acuña team up for this tale of overcoming challenges and striving to be the best.

Read the album
Add to cart
Added to your cart
WWE Then Now Forever Special
(0)
$1.99
Become a super reader
Write reviews and get comics for free!

Read the album
Add to cart
Added to your cart
Wings of Light
(0)
$5.99
In the distant future, Earthlings explore worlds scattered at the far reaches of the cosmos, on which civilizations have often forgotten they are descendants of settlers from Earth. Two young agents on a mission visit a planet that has reverted to a medieval way of life, but when they save a young pregnant woman who has been sentenced to death for mating with a mysterious and mythical "angel with wings of light,” they find themselves entrenched in political turmoil with a religious party who has ascended to power.

Read the album
Add to cart
Added to your cart
The Forgotten Queen TPB
(0)
$9.99