V.1 - Dejah Thoris and the Green Men of Mars 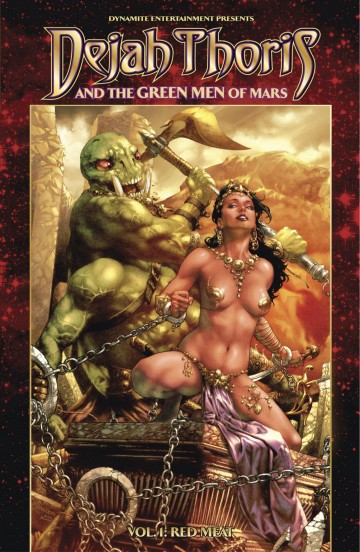 Read an excerpt
$12.99
Add to cart
Added to your cart
Included in the izneo Premium subscription
Learn more about izneo Premium

The peace John Carter brought to Helium and Thark is new and fragile. On the eve of a Red & Green festival to balm age-old hatreds, Dejah Thoris is kidnapped. The ordeal triggers her lingering nightmares of abuse and helplessness at the hands of brutal Tharks. And the kidnapper is nightmare personified: Voro. He caters to a taste some green men never lost: the red meat of Helium women. COLLECTION FEATURES: issues 1-4 of the hit series written by Mark Rahner and illustrated by Lui Antonio and complete risqué cover gallery featuring the art of Jay Anacleto, Mel Rubi, Alé Garza, Lui Antonio, Walter Geovani, and Cezar Razek.