One of the newsmakers is now a comic book sensation. Tiger Woods is, in most respects, the most famous golfer of all time. He may have had some recent troubles, but his life is one filled with very interesting tidbits. Come inside and see how his life lead him to be one of the most famous sports stars in the history of the United States, and the world, and learn about the man behind all of these news stories. Go for a hole in one with this comic detailing the life story of this major athlete. 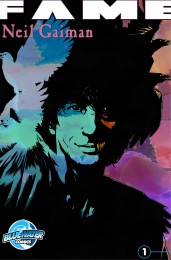 Neil Gaiman started out humbly in the so-called British Invasion of comics in the 1980s, writing rock and roll biographies, but soon leaped into the vanguard with his revolutionary series The Sandman, which helped launch the Vertigo imprint at DC. His newfound literary acclaim helped launch Gaiman into the world of books, which he soon conquered with equal acclaim and passionate following from readers. Gaiman is also one of the few comic book writers of his generation to make a successful transition into film. Despite all this, he wasn't immune to the growing controversies of the '90s comic book scene, embroiled for years over the legal minutiae of creator rights. Gaiman has managed to transcend all boundaries, however, a true icon for our times. 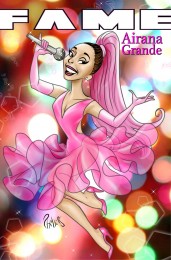 From an early age, it was clear that Ariana Grande-Butera would be a star. From the small stage of a local theatre in Boca Raton, Ariana honed her craft. Following in the footsteps of her Broadway-star half-brother, Frankie, she quickly rose to stardom. Read her coming- of-age story in the pages of the latest release from TidalWave Comics! Cover by famed comic book artist Joe Phillips. 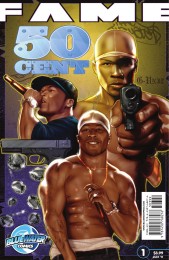 50 Cent's life is as dramatic as any of his songs. TidalWave takes a look at the rapper's life, his feuds, and, most importantly, his music. This new comic series has been featured in “Rolling Stone," “E! Entertainment Television," “New York Times,” and hundreds of more media outlets. 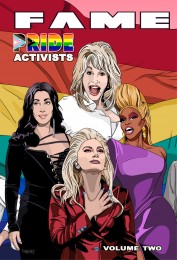 This unique graphic novel is a tribute to the lives and accompaniments of those who are proud to stand up for those who aren’t afraid to live authentically. Superstar artist George Amaru provides a stunning one of three covers that link together to showcase the Pride Flag. Everyone needs an ally, especially when pushing for social change. Dolly Parton, the woman famous for proclaiming, “It costs a lot of money to look this cheap,” has proven to be a powerhouse singer, songwriter, multi-instrumentalist, record producer, actress, author, businesswoman, and philanthropist. Cher is a platinum-selling singer, an award-winning actress, and a performer for the ages. She’s bright, accomplished in multiple areas, and the voice of a generation. The self-described “Supermodel of the World,” RuPaul is easily the world's most famous drag queen. This whimsical look at the life and times of the host of the popular Logo series “RuPaul’s Drag Race” is as unique as the woMan himself. You've all seen the music videos. The performances. The award show acceptance speeches and the interviews. We all know her name and her image, but how many of us know the story of Lady Gaga? Take a look behind the curtain and learn the truth about her. These four LGBTQ activists showcased in this edition is just a snapshot into thier lives and the first of the allies we have done comic books on. This 96-page graphic novel will make you feel more pride. 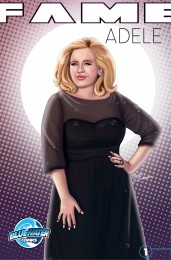 TidalWave Productions continues it's popular line of biography with FAME: Adele. Learn the exciting path of the British power balladeer who took the world by TidalWave and ruled the airwaves with mega hits like 'Chasing Pavements' and 'Someone Like You.' 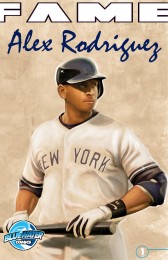 Alex Rodriguez has made his name in both baseball and the tabloids over the last twenty years, playing for a number of Major League Baseball teams, always staying in the public eye. Take a look at his earliest days on through his most recent escapades and get the inside scoop on this possible legend of baseball. 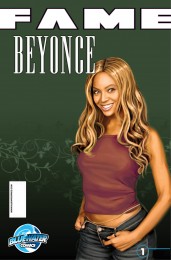 All the single ladies know that Beyonce is one of the hottest musicians in the world, if not the hottest. From dreaming of singing as a young girl, to her days in Destiny's Child, to her days now as a solo pop superstar, take a look behind the curtain at this stellar musician and person. She might not be a superhero, but judging by all the things she's done, you'd be hard pressed not to think she is. She's amazing, fierce, and always striving to be the best. 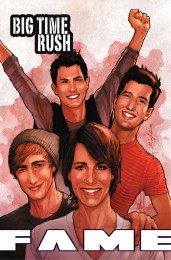 The biggest hit show of for Nickelodeon now hits the comic pages. 4 friends from Minnesota started a pop singing group on the show, and now you can learn the back story of these 4 young men and their co- stars. Find out where Kendall, Logan, Carlos, and James came from, and see what brought these four young men into the limelight for all the world to see. Be here as you join the phenomenon that is sweeping the nation. 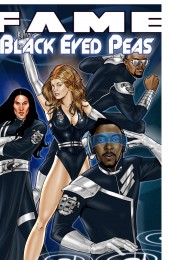 They've transcended their vigilant hip-hop roots and have become a global phenomenon, the likes of which the music world has rarely seen and after their tremendous Grammy win, a young hip-hop-hopeful learns just what it takes to become the best while retracing the defining events in each of the band member's funkadelic lives. 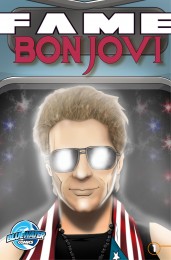 This story of New Jersey favourite Rock and Roll Band Bon Jovi, who survives 3 decades of trials and tribulation. We go back to the early years of the band and how frontman Jon Bon Jovi gets a record deal and kept the band going for 3 decades. Classic rags to riches story, what kept the band going strong and will it be the end of the crossroad? 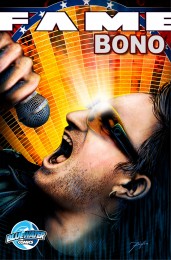 As the lead singer of U2, Bono electrifies audiences with his dynamic stage presence, while his electrifying persona draws people to causes that concern all of us. His story is born from a divided Ireland and the dueling nature of the rock star live versus a devout faith. 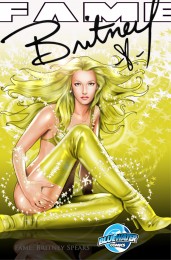 Britney Spears-- the most famous superstar of the 21st century. What does it take to reach those heights in the Internet Age? What are the hidden costs when every move makes the headlines? More than an entertainment powerhouse. More than a dancer and musician. Britney Spears is a survivor! 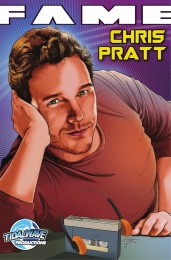 No actor on the planet is hotter right now than Chris Pratt. His work showcases his affable sense of humor, his boy-next-door good looks, and his improvisational style that has won him fans from around the world. He's able to do comedy, drama, horror, and science fiction because his work defies genre. Read the story behind his meteoric rise from a guest-stint on "Parks and Recreation" that turned into a permanent spot to starring in the biggest film of 2015, "Jurassic World." 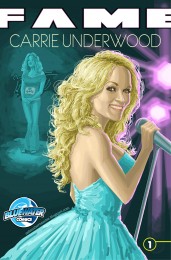 What happens when a small town girl will stop at nothing to follow her dreams? Carrie Underwood is what happens. A story of faith, determination and inspiration. FAME: The Carrie Underwood Story follows the Superstar’s trials and tribulations, leading her to become the top female performer of our era. 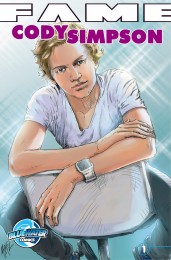 TidalWave productions is at it again with their popular "FAME" line of biography comic books. This time Aussie singing sensation Cody Simpson is featured. Learn all about Cody's early life and rise to FAME. With hits like "iYiYi"with popular artist Flo Rida, Cody is sure to be the next big thing. 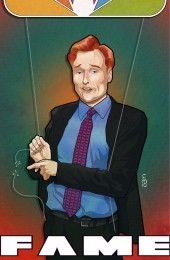 Conan O'Brien: The man, the myth, the legend, nay, he's no myth. He's just legend. A giant in both the comedy fields and real life, Conan O'Brien has been working longer than most of his fans have been alive. He has red hair, nay, strawberry locks, and he's an extraordinary dancer. Wait, this is supposed to be a solicitation text for a comic? Um, buy this comic or else! Conan might do something drastic like shave his beard, and I don't think the world can deal with him clean-shaven anymore. 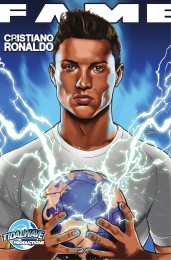 Cristiano Ronaldo dos Santos Aveiro rose from poverty in Portugal to become one of the wealthiest men to ever play football. His father, a poor gardener who drank too much, and his mother, who waited tables and other odd jobs to provide care for four children, recognized his talent early and pulled him from school at a young age so he could devote his boundless energy to the game he loved. Wearing the number seven worn by David Beckham, Ronaldo’s speed, footwork, and skills as a forward and a winger have forged him one of the sport’s most respected players of all time. 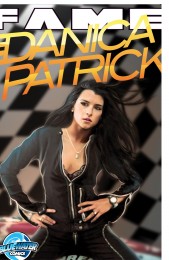 The life and times of Danica Patrick told in comic book format. High speeds and high stakes have followed her throughout her life, and yet, she's never given up and never given in. The hit bio comic series continues, putting the pedal to the medal and racing toward that checkered flag to give you all the background information you could ever want on the racing Sports Illustrated cover girl. 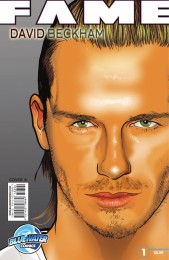 One of the most famous sports icon in modern history comes to the FAME comic book series. We look at David's life through his eyes, starting as a young boy working hard to make the grade and dreaming of one day playing for Manchester United and England, to his new life in America. Sex symbol, style icon, celeb husband and father, brand Beckham. Strip all this away and he’s still the boy from Leytonstone. 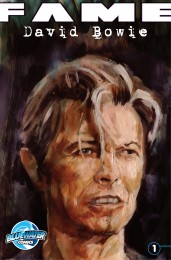 Before there was Lady Gaga. Before there was Adam Lambert. Before there was The Killers…there was David Bowie. Bowie is one of the most influential artists of this generation from his music, fashion and persona. Bowie has reinvented himself on several occasions to make him the chameleon of the music world. "FAME: David Bowie" looks into the iconic musician in a way never seen before.