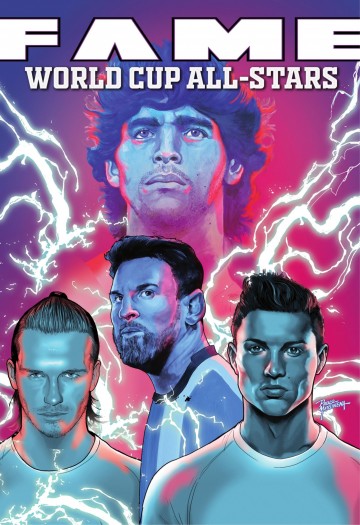 Americans call the game “soccer,” while the rest of the world dubs it “football.” Whatever it’s called, fans know their names: Maradona. Beckham. Ronaldo. Messi. Diego Maradona’s career formed while he was only a child kicking a ball in the slums of Buenos Aires. He became a legend during the World Cup tournament in 1986 and was named FIFA Player of the 20th Century. David Beckham dreamed of playing for Manchester United and England and grew into a worldwide sex symbol, style icon, celebrity husband and father, and international brand. Cristiano Ronaldo dos Santos Aveiro rose from poverty in Portugal to wear the number seven worn by Beckham. His speed, footwork, and skills as a forward and a winger made him one of the sport’s most respected players. One of the youngest ever to play the game professionally, Lionel Messi, proudly sporting the coveted number 10 worn by Maradona and Pele’ on his jersey, holds five Ballon d’Ors and a meritorious achievement award from FIFA. Their stories inspire us and teach us the meaning of hard work and dedication

This digital comic is available in english version. The following reading modes are available with the izneo reader:
FAME- Volume 1 - FAME: The World Cup All-Stars: David Bekham, Lionel Messi, Cristiano Ronaldo and Diego Maradona - Michael L. Frizell - to read online on izneo or download on your iOS and Android tablet or smartphone.

Read the album
Add to cart
Added to your cart
V.64 - FAME
(0)
$3.99
Millions of fans, numerous Grammys, and a load of good press-- Taylor Swift's meteoric rise has given her the sweet taste of FAME at a very young age. Her fans love her, radio and television adore her, and young men everywhere wish they could date her. Join us for a look at her life, from the very beginning all the way through today.

Read the album
Add to cart
Added to your cart
V.48 - C.1 - FAME
(0)
$3.99
Introducing the newest promising young talent, Victoria Justice! As a singer, song-writer, dancer, AND actress, Justice is the ultimate Renaissance woman. She got her start on the popular Nickelodeon television show iCarly before earning her very own show called Victorious. Next up for Justice is the release of her debut, full- length album. Discover the story behind her impressive talent in FAME: Victoria Justice.

Read the album
Add to cart
Added to your cart
FAME: LeBron James
(0)
$3.99
Is LeBron James the greatest basketball player of all time? The Akron, Ohio native grew up in an impoverished home. His mother, sensing LeBron would thrive in a stable family environment, allowed him to live with a local youth basketball coach when he was just nine years old. Now the holder of three NBA championships, four MVP awards, two Olympic gold medals, and much more, LeBron’s fame has afforded him the ability to use his numerous endorsements to start companies, participate in social activism, and donate to worthwhile causes. His rags to riches story is chronicled in this dynamic graphic novel!
Coming soon

Read the album
Pre-order
Added to your cart
Classic Hollywood Leading Men: John Wayne, Christopher Reeve, Bruce Lee and Vincent Price
(0)
$11.99
The actors profiled in this graphic novel share one thing in common: They’re unforgettable. Born Marion Mitchell Morrison, his distinct vocal cadence, intimidating physical presence, and signature look made him a box office draw for 30 years. Few actors achieve the level of fame afforded silver screen icon, John Wayne. What makes a man a true hero? Is it the role he plays or the life he leads? Explore the life of legendary actor and philanthropist Christopher Reeve in this tribute to the man behind Superman’s cape. The most influential martial artist of all time, Bruce Lee was an actor, teacher, and now, an icon. Follow Bruce’s life from child actor to his tragic death and posthumous superstardom. The name Vincent Price is synonymous with all things horror. Explore the life of an actor who transcended a genre and became the voice of the darker side of life. TidalWave’s popular TRIBUTE line tells the stories of famous people who left an indelible impression on our popular culture.
Coming soon