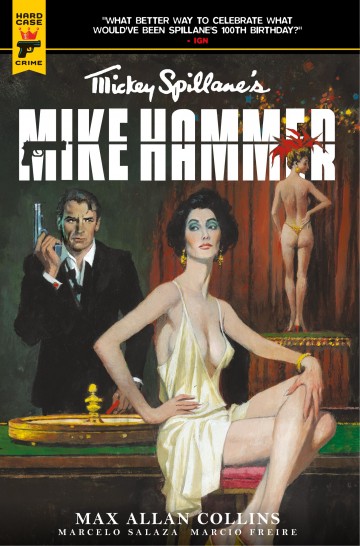 When a chance encounter with a captivating femme fatale leads to a violent mob retaliation, hard-boiled detective Mike Hammer finds himself dodging both bullets and broads as he undertakes the most dangerous case of his career. Mickey Spillane’s tough-talking, brawling, skirt-chasing private eye returns to comics for the first time since the 1950s in this thrilling noire series from Max Allan Collins. Collects Mickey Spillane’s Mike Hammer #1-4 “Max Allan Collins knows a thing or three about writing private dicks!” – Critical Blast “The comic doesn’t pull punches. 4 out of 5.” – Comix Asylum “What better way to celebrate what would’ve been Spillane’s 100th birthday?” – IGN

Read the album
Add to cart
Added to your cart
CSI - Bad Rap
(0)
$4.59
A duel between retro-punk rappers from the white-hot music scene in Las Vegas ends with one of them murdered. The problem for Gil Grissom and his team of crime scene investigators isn’t a lack of suspects, it’s too many—each with his or her own reason to want Busta Kapp dead. But when the suspects start becoming murder victims themselves, Grissom knows he’s got to solve this case in a hurry … before the victim list goes off the charts!