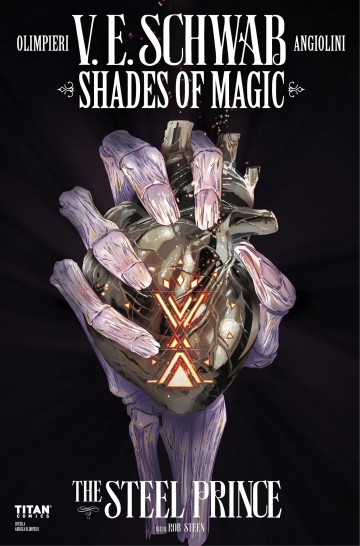 Hot-headed, arrogant, and untested, Maxim found himself in Verose, better known as the Blood Coast, and up to his neck in trouble. Determined to make a name for himself and assert the power of the crown in this insalubrious backwater, he fell in with the local garrison, and was taken under the wing of Isra, an experienced if battle weary soldier. Skilled in the illegal art of bone magic, Arisa rules the Verose with a violent fist. Isra is both her niece – and the only survivor of the Verose garrison’s attempt to wrest control back from the Pirate Queen. But Arisa has overreached. Seeking new members for her crew, she has announced a fighting tournament, with the winner gaining the right to face Arisa in combat. As Isra predicted, she must defeat Maxim in order to face off against her aunt, Arisa the Pirate Queen. Using all her expertise, Isra bested Maxim in single combat, and took the prize.

Read the album
Add to cart
Added to your cart
V.1 - Shades of Magic
(0)
$13.99
"Written by #1 New York Times bestselling author V.E. Schwab and torn from the universe of the Shades of Magic sequence, this all-original comic book prequel to A Darker Shade of Magic is perfect for fans of bloody, swashbuckling adventure and gritty fantasy. Delve into the thrilling, epic tale of the young and arrogant Prince Maxim Maresh, long before he became the King of Red London and adoptive father to Kell, the lead of A Darker Shade of Magic. The youthful Maresh is sent to a violent and unmanageable port city on the Blood Coast of Verose, on strict orders from his father, King Nokil Maresh, to cut his military teeth in this lawless landscape. There he encounters an unruly band of soldiers, a lawless landscape, and the intoxicatingly deadly presence of the newly returned pirate queen, Arisa… Collects Shades of Magic: The Steel Prince #1-4"

Read the album
Add to cart
Added to your cart
V.1 - C.1 - Shades of Magic
(1)
$4.59
In a world where magicians navigate alternate Londons, The Prince of Red London pursues a dark version of his city – and faces worse than exile. Join the gaslamp fantasy phenomenon with a new Shades of Magic prequel from award-winning creator V.E. Schwab.

Read the album
Add to cart
Added to your cart
Shades of Magic - Volume 1 - The Steel Prince - Chapter 2
(0)
$4.59
Decades after the worlds have come apart, Red London is peaceful and thriving under the Maresh Empire. Believing that one day the magic separating the different worlds would come undone, Prince Maxim is searching the land for powerful magicians who can travel between those realms. Frustrated by his son’s negligence of their own kingdom, King Nokil banishes Maxim to Verose, also known as the Blood Coast, to redirect his focus. Upon his arrival, Maxim encounters rough bandits, hoodlums, and worst of all, the unruly soldiers of the royal military. However, his troubles don’t end there, as a ship with a dangerous looking crew has docked at the harbour…
#StayAtHome

Read the album
Add to cart
Added to your cart
V.1 - Doctor Who: The Road To The Thirteenth Doctor
(0)
$13.99
Bestselling comics writer Jody Houser and fan-favorite artist Rachael Stott launch the Doctor into a new universe of unforgettable adventure! Featuring Jodie Whittaker as the first female incarnation of the Doctor. Bursting straight out of her hit new television adventures, this first collection of the Thirteenth Doctor’s comic book tales is a scorchingly fresh incarnation, taking the show – and its comic strip adventures – where no Doctor has gone before! Facing off against vile villains and misunderstood monsters in flavours both human an alien, the Doctor and her friends must push the limits of time and space, confronting evils deliberate and accidental all throughout history – and uncovering secrets long hidden and wonders never-seen along the way! Perfect for fans old and new alike, this is an awe-inspiring jumping on point to the Doctor Who comics mythos. Collects Doctor Who: The Thirteenth Doctor #1-4