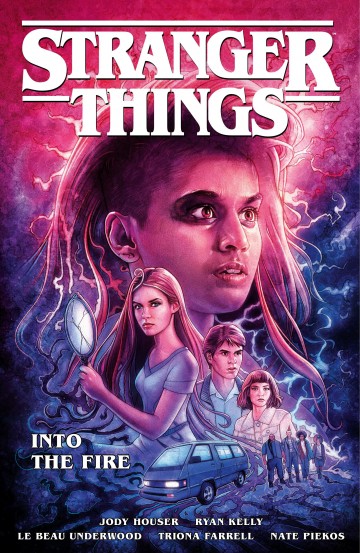 Beyond Hawkins Lab, Starcourt Mall, Dungeons and Dragons, Monsters, and Mindflayers, the powerful children that have escaped from Hawkins Lab are out in the world, trying to live normal lives, but it comes at a steep cost. Nine was left behind in Hawkins Lab, comatose and alone. Now she lives in a fractured reality of her own creation under the watchful eyes of doctors who have no idea about the psychic volcano building insider her that erupt at any moment, obliterating their entire hospital. Three and Nine's twin sister both escaped Hawkins lab several years ago and have been on the run ever since. They had just settled down into a new life when, all of the sudden, the lab has made the national news. With the veil of normalcy completely shattered, they pack everything they have and hit the road, hoping to find and help any of the other kids they can. When Kali (number Eight) informs them that Nine is still alive it becomes a race against the clock to save a beloved sister, from the doctors that keep her, as well as the delusions that threaten to fracture her psyche beyond repair. Perfectly penned by writer Jody Houser (Critical Role, Star Wars: Tie Fighter) with kinetic pencils by Ryan Kelly (New York Four, Star Wars) and tight inks by Le Beau Underwood (Catwoman, Immortal Hulk) this third book in the Stranger Things comics line takes the story to brand new territory. Collects Stranger Things: Into the Fire #1-#4.

This digital comic is available in english version. The following reading modes are available with the izneo reader:
Stranger Things- Volume 1 - Stranger Things: Into the Fire (Graphic Novel) - Jody Houser - to read online on izneo or download on your iOS and Android tablet or smartphone.

Read the album
Add to cart
Added to your cart
V.2 - Stranger Things
(1)
$10.99 $5.99
A prequel comic from Netflix's award-winning series, delving into the mysterious workings of Project MK Ultra and the weird science that opened the door to the Upside Down. Francine, a teenage girl with precognition, has struggled through a lifetime of exploitation: first by her parents, then by Dr. Brenner of Hawkins Laboratory. Dr. Brenner wants to harness her powers as well as those of the other gifted children that they hold captive at the lab. Wracked by increasingly disturbing visions, she sees an opportunity for her and all the children to escape. But at what cost? From the pen of Jody Houser (Faith, CMYK: Magenta, Max Ride: Ultimate Flight) and featuring art from Edgar Salazar and Keith Champagne (Black Panther), Stranger Things comics is essential reading for fans of the hit Netflix series as well as fans of the urban fantasy and horror genres in general. Collects Stranger Things: SIX issues #1-4.

Read the album
Add to cart
Added to your cart
Stranger Things: Zombie Boys (Graphic Novel)
(1)
$6.99 $3.99
Following the events of season one of Netflix's pop-culture sensation Stranger Things, our main characters struggle with returning to normal life after overcoming supernatural horror. School is back in session in the normally quiet town of Hawkins, Indiana. Mike, Lucas, Dustin, and Will are still grappling with the traumatic encounters with the Demogorgon and the Upside Down in season one of the hit Netflix series. As tensions rise and fractures begin to form in the group, a new kid shows up to AV club with a Betamax Camcorder and an idea. The new Spielberg-wannabe friend, Joey Kim, wants to make a horror movie about a local legend, but when he sees Will's drawings, he discovers that his new friends are local legends. Written by best-selling author Greg Pak (Mech Cadet Yu, The Incredible Hulk, Star Wars: Age of Rebellion) and drawn by Valeria Favoccia (Assassin Creed: Reflections, Doctor Who: The Tenth Doctor).

Read the album
Pre-order
Added to your cart
Stranger Things: Erica the Great
(0)
$7.99 $3.99
Become a super reader
Write reviews and get comics for free!

Stranger Things- Volume 1 - Stranger Things: Into the Fire (Graphic Novel) - Jody Houser - to read online on izneo or download on your iOS and Android tablet or smartphone.
Coming soon

Read the album
Pre-order
Added to your cart
Critical Role: The Mighty Nein Origins--Caleb Widogast
(0)
$10.99 $5.99
Vox Machina Origins writer Jody Houser joins fan-favorite artist Selina Espiritu, and Matthew Mercer and Liam O'Brian to reveal Caleb's troubled past in this all-new graphic novel! Fans of Critical Role won't want to miss this newest edition to their Mighty Nein library! A fire can keep you warm...or it can consume you. When Bren Aldric Ermendrud was chosen to attend the Soltryce Academy, everyone knew he would have an important future in service to the Empire. But nobody--least of all Bren himself--could foresee the cruelty he endured, and the ways in which it would break and remake him. Witness the events that transform Bren into the Mighty Nein's Caleb Widogast, and how they'll inform the path he'll take in the future.