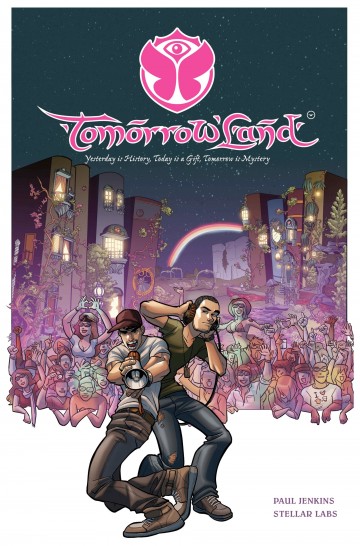 The star DJs of the Tomorrowland and Tomorrowland electronic music festivals explode into comics with a thrilling music-fantasy thriller! From the Eisner award-winning writer of Spider-Man, Wolverine: Origin, The Inhumans and The Darkness comes a music-led adventure like no other! Meet Dimitri Vegas and Like Mike, two young DJs – and the public faces of the world-renowned Tomorrowland festival – as they are drawn into an impossible adventure to save the vital spark of creativity. Over the course of this retina-blasting fantasy adventure, the pair find themselves sucked into an eternal war between two worlds – a battle waged between the forces of creation and destruction for the energy we all carry inside us. It’s a war we’re rapidly losing – but can two DJs turn the tide over the course of just one festival? There’s only one way to find out!Collects Tomorrowland #1-4Copyright 2013 ID&T

Read the album
Add to cart
Added to your cart
V.4 - Tomorrowland
(0)
$3.59
The mini-series comes to a rousing finish with a jaw-dropping 32 pages of story! The award-winning DJ brothers, Dimitri Vegas and Like Mike, are back together again, but this time, they are facing each other head-to-head on the main stage of the Tomorrowland festival itself! The Nameless one has turned Mike to the dark side… and only his brother can stop him… with a little help from international DJ friends like Nervo, Steve Aoki, Thomas Gold, Zatox, Sander Van Doom – and many more! Copyright 2013 ID&T

Read the album
Add to cart
Added to your cart
Scare City
(0)
$9.99
Deep beneath the human world lies Scare City, the hub where all the ghouls, ghosts and goblins dwell in perfect harmony. It took the monsters centuries to overcome their differences and live together in peace. Tensions rise between clans when a mysterious light begins to steal people in the night causing Scare City to fall back into the hands of angry, pitchfork-wielding mobs! Its fate rests, unexpectedly, in the hands of a compassionate Zombie-Witch baker, Gina, who doesn’t want to see her home torn apart. Gina and her crew of spooky friends will do whatever it takes to solve the mystery and bring everyone together once again.

Read the album
Add to cart
Added to your cart
Revelations
(0)
$9.99