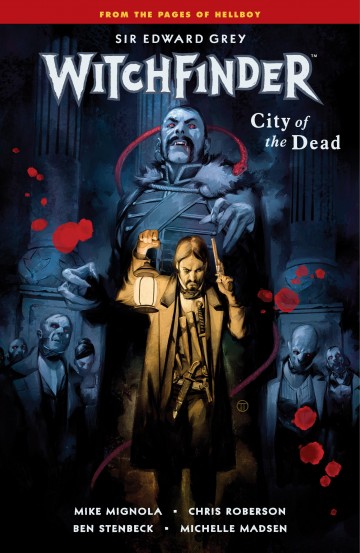 Flesheating corpses and an ancient temple discovered beneath London lead authorities to call upon Edward Grey, Queen Victoria's official occult investigator. But the sinister Heliopic Brotherhood of Ra also has interests in the underground ruins. When they ask for Grey's help, he has to wonder if the threat is great enough to team up with a secret society he's sworn to destroy. Hellboy creator Mike Mignola teams with his new writing partner Chris Roberson (iZombie, Hellboy & the BPRD 1953) and his original Witchfinder collaborator Ben Stenbeck (Frankenstein Undergound) for an occult mystery exploring the darkest corners of London.

This digital comic is available in english version. The following reading modes are available with the izneo reader:
Witchfinder- Volume 4 - Witchfinder Volume 4: City of the Dead - Mike Mignola - to read online on izneo or download on your iOS and Android tablet or smartphone.

Read the album
Add to cart
Added to your cart
V.6 - Witchfinder
(0)
$10.99
Sir Edward Grey takes on Victorian London's most infamous killer: Jack the Ripper! Abandoned by Scotland Yard when he insists on an occult purpose to the murders, Grey finds an ally in American occult adventurer Sarah Jewell. Their investigation leads them to the Proserpine Home for Wayward Women, and a dangerous conspiracy that reaches the highest levels of British political power! Mike Mignola, Chris Roberson, and Christopher Mitten tell the story of this turning point in the Witchfinder's history with help from colorist Michelle Madsen and letterer Clem Robins. Collects Witchfinder: Reign of Darkness #1-#5 and bonus material.

Read the album
Add to cart
Added to your cart
V.1 - Witchfinder
(2)
$14.29
Witchfinder- Volume 4 - Witchfinder Volume 4: City of the Dead - Mike Mignola - to read online on izneo or download on your iOS and Android tablet or smartphone.

Read the album
Add to cart
Added to your cart
Witchfinder Omnibus Volume 1
(0)
$14.99
The collected adventures of England's greatest occult investigator! When the man called the Witchfinder becomes an agent of the Queen, he is led from the sparkling echelons of Victorian London to its dark underbelly, through the American West, and to explore the mysteries of Unland! Throughout his adventures, he'll face occult conspiracies, rampaging monsters, and London's most infamous secret society: the Heliopic Brotherhood of Ra! This first omnibus edition collects Sir Edward Grey: Witchfinder volumes 1-3, complete with extensive sketchbook section.
Have you read the comics?
The Umbrella Academy, Dune...

Witchfinder- Volume 4 - Witchfinder Volume 4: City of the Dead - Mike Mignola - to read online on izneo or download on your iOS and Android tablet or smartphone.
Coming soon

Read the album
Pre-order
Added to your cart
Hellboy Universe Essentials: B.P.R.D.
(0)
$8.99
Jump on to the B.P.R.D. series and jump in to the horror-fueled adventure with this introductory volume! Meet Abe Sapien, a senior agent in the Bureau for Paranormal Research and Defense. He and his fellow uncanny agents Liz Sherman, Roger the homunculus, and Johann Kraus uncover his occult origins while try to stop a plague of monstrous frog men. As it begins its spread across America, an apocalyptic new direction to Mignola's stories opens up. Hellboy Universe Essentials: B.P.R.D. is a perfect entry point for curious fantasy, horror, and occult readers looking for a taste of something new! Collects B.P.R.D.: Plague of Frogs #1–#5.
New

Read the album
Add to cart
Added to your cart
Young Hellboy: The Hidden Land
(0)
$14.99

Read the album
Add to cart
Added to your cart
Hellboy Universe: The Secret Histories
(0)
$19.99

Read the album
Add to cart
Added to your cart
Our Encounters with Evil: Adventures of Professor J.T. Meinhardt and His Assistant Mr. Knox
(1)
$10.99
Close