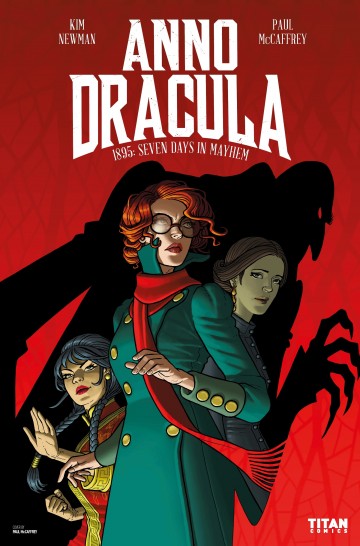 1895. Prince Dracula has ruled Great Britain for ten years, spreading vampirism through every level of society. On the eve of Dracula’s Jubilee, radical forces gather to oppose the tyrant. Kate Reed, vampire journalist and free-thinker, takes a seat on the revolutionary Council of Seven Days, though she learns that the anarchist group harbors a traitor in its midst. The Grey Men, Dracula’s dreaded secret police, have been ordered to quash all resistance to the rule of the arch-vampire. With intrigue on all sides, the scene is set for an explosive addition to the Anno Dracula series. An all-new comic series based on the best-selling Anno Dracula novels by Kim Newman! Comic series written by creator Kim Newman with art by Paul McCaffrey (The Third Doctor).

Read the album
Add to cart
Added to your cart
V.1 - C.5 - Anno Dracula: 1895 - Seven Days of Mayhem
(0)
$3.99
Framed for an attempt to blow up Dracula’s Tin Jubilee river procession, Kate Reed is now running for her undead life, pursued by Dracula’s secret police force. Meanwhile, the Lord of Strange Deaths and his cohorts have used the commotion to commit the ‘crime of the Century’. Now Kate Reed, Irman Vep and Fah Lo Suee must team up for one final battle with the true architect of the terrorist plot before facing the ultimate evil of COUNT DRACULA himself…

Read the album
Add to cart
Added to your cart
V.1 - C.4 - Warhammer 40,000: Deathwatch
(0)
$4.59
Kill Team Agathon faces off against the Xenos horde that has unexpectedly landed on Sidra. Their top priority is to warn Xyston of this invasion, no matter the cost. The team fearlessly slayed every Ork in their path to the transmission station. However, they are soon outnumbered and heavily outgunned. Surrounded and wounded, Rurik makes the ultimate sacrifice in order to buy time for the rest of the team. To honor the Old Wolf, the team forges ahead towards the station. Will they be able to warn Xyston in time?!