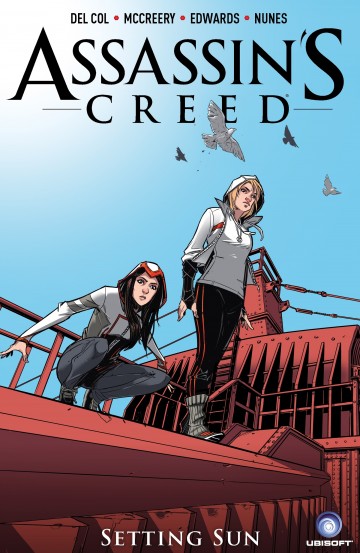 Collecting the second arc of the critically-acclaimed Assassin's Creed comics, Setting Sun sees Charlotte searching for a clue that will help the Assassins on their quest to foil the Templar's plans. Hidden deep in the memories of her Inca ancestor lies a word that will save them – if it's not too late! Collects Assassin's Creed: Assassin's #6-10

Read the album
Add to cart
Added to your cart
V.3 - Assassin's Creed: Assassins
(1)
$14.99
The answers you seek lie deep within the past. The Brotherhood of Assassins is in trouble. Their long feud with the Templar Order has depleted their resources, leaving the group struggling to regain their footing in a world under threat. Could joining forces with a mysterious collective help them turn the tide, or will such an alliance prove impossible? Join Charlotte de la Cruz and Galina Voronina as they try and navigate a clear path for the Assassins through turbulent water! Collects Assassin’s Creed #11-14. “Really captures the essence of the games!” – Comics: The Gathering “Full of action and emotions!” – The Xbox Hub “A great creative team” – Nerdly

Read the album
Add to cart
Added to your cart
V.3 - C.4 - Assassin's Creed: Assassins
(0)
$4.99
Charlotte's plan begins to unravel as the she realises she may be completely out of her depth. It's time for her to sink or swim, but can she keep it together long enough to get what she needs from Consus – and Erudito?

Read the album
Add to cart
Added to your cart
V.1 - C.2 - Assassin's Creed: Assassins
(0)
$3.99
Become a super reader
Write reviews and get comics for free!