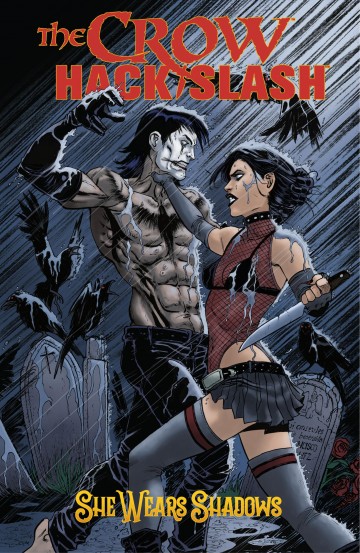 One seeks revenge from beyond the grave, the other puts slashers in the grave! Cassie Hack crosses over into the world of The Crow in this graphic novel mashup. The crow flies. A soul is brought back. But something is wrong. Angeles Cero won't stop killing on her quest for revenge, and the bodies are piling up. Now, slasher hunter Cassie Hack and her monstrous partner Vlad are on the trail of the Crow Killer, assuming her to be one of the masked murderers they've hunted for years. But they aren't the only force trying to make the universe right again. Can the legendary killer of undead killers stomach working side by side with the one thing she hates the most?

This digital comic is available in english version. The following reading modes are available with the izneo reader:
Have you read the comics?
The Umbrella Academy, Dune...

Read the album
Add to cart
Added to your cart
Alter Nation
(0)
$8.99
The top-secret team of cryptid-heroes, GK Delta, are committed to protecting humanity from extraordinary threats. When you are all that stands between humanity and certain annihilation, you must be able to trust each other. So when Bomber betrays his brothers in arms, the team is forced to fight one of their own! What's worse, what if he was right to leave? The team must confront their worst enemies while grappling with the fact that they may not be the heroes they think they are! Collects an entirely new 50-page OGN and the 12-page comic Alter Nation: The Mystery of Whining Winny.