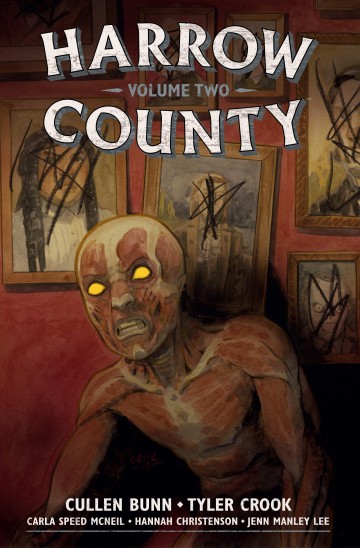 The next chapter of the highly acclaimed, Eisner nominated horror fantasy in deluxe, oversized hardcover format. Emmy believed she was one of a kind, that there was no one else in the world quite like her. Then magical strangers arrived in Harrow County and she discovered just how wrong she was. Are these bizarre beings--each possessing strange and ghastly supernatural abilities--her family, or her foes? Collects the volumes three and four of Harrow County in a deluxe, hardcover, and oversized format with a new cover, sketchbook material, essays, "Tales from Harrow County" bonus stories by guest creators, and more!

This digital comic is available in english version. The following reading modes are available with the izneo reader:
Harrow County- Volume 1 - Harrow County Library Edition Volume 2 - Cullen Bunn - to read online on izneo or download on your iOS and Android tablet or smartphone.

Read the album
Add to cart
Added to your cart
Harrow County Library Edition Volume 1
(0)
$28.79
The first chapter of the highly acclaimed, Eisner nominated horror fantasy tale in deluxe, oversized hardcover format. Collects the first two volumes of Harrow County in a deluxe, hardcover, and oversized format with a new cover, sketchbook material, essays, "Tales from Harrow County" bonus stories by guest creators, and more! Emmy always knew that the woods surrounding her home crawled with ghosts and monsters. But on the eve of her eighteenth birthday, she learns that she is connected to these creatures--and to the land itself--in a way she never imagined.

Read the album
Add to cart
Added to your cart
Tales from Harrow County Volume 1: Death's Choir
(0)
$10.99
Our "indie" publishers & authors!
A selection of independent publishing!

Read the album
Add to cart
Added to your cart
V.1 - Cyberpunk 2077
(1)
$11.99
Dive deeper into the world of Cyberpunk 2077! Nadia, an assistant EMT for a privately-owned business known as Trauma Team International, is the sole survivor of a failed rescue mission turned shootout. After she agrees to continue work for an upcoming extraction mission, Nadia discovers that her new extraction subject is Apex--the man who's responsible for Nadia's former team members' deaths. A hundred floors high in a skyscraper filled with members of Apex's rival gang, Nadia and her team must complete the extraction. Cullen Bunn (Harrow County, Uncanny X-Men) and Christopher Mooneyham (Predator, Nightwing) introduce an all-original series based on CD Projekt Red's brand-new game Cyberpunk 2077! Collects Cyberpunk 2077 #1-4.