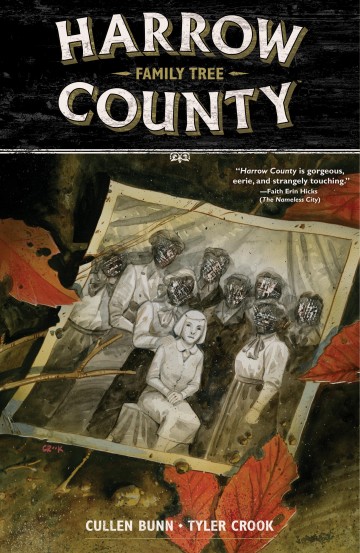 The Southern horror series continues and is now under development for a SyFy Network television show! Emmy believes she is one of a kind, that there is no one else in the world quite like her. As strangers arrive in Harrow County, though, she discovers just how wrong she is. Are these beings--each possessing strange and ghastly supernatural abilities--her family? Collects the Dark Horse comic series Harrow County#13-#16. Praise for Harrow County from those who know their way around a good horror story! "Genuinely creepy and engaging, plus delicious art." -Mark Millar (Kick-Ass) "Harrow County #1 is worth checking out if you're a horror comic fan!" -Clive Barker (Hellraiser) "A rare thing, both wonderfully charming and genuinely disturbing." -Mike Mignola (Hellboy)

Read the album
Add to cart
Added to your cart
Harrow County Volume 5: Abandoned
(0)
$9.99
The Abandoned, that hulking figure with haunting yellow eyes, rarely leaves his ramshackle cabin deep in the woods of Harrow County. But it wasn't always so. And when hunters travel to Harrow County in search of big game, they get a lot more than they bargained for. As Emmy meets more visitors from the outside world, she discovers secrets of her own past and the very foundations of Harrow County. Including a story illustrated by guest artists Carla Speed McNeil and Jenn Manley Lee, this volume collects issues #17-#21 of the award- winning horror comic Harrow County. • Eisner-nominated series! • Includes a two-part stort with guest art by Carla Speed McNeil and Jenn Manley Lee! • Cullen Bunn is winner of the 2011 Broken Frontier Best Writer Independent Award! • Winner of the 2015 Ghastly Award for Best Ongoing Title! • "Deftly written, beautifully drawn, thoughtfully imagined--Harrow County already feels like a classic."-- Michael Chabon (The Adventures of Kavalier and Clay) • "Genuinely creepy and engaging, plus delicious art."--Mark Millar (Kick-Ass) • "Harrow County #1 is worth checking out if you're a horror comic fan!"--Clive Barker (Hellraiser) • "A rare thing--both wonderfully charming and genuinely disturbing."--Mike Mignola (Hellboy) • "One of the best horror comics I've ever read. Super creepy!"--Josh Williamson (Birthright) • "If you like comics at all, you should order that Harrow County."--Phil Hester (Green Arrow) • "From the sweeping landscapes to the subtleties of the human face, [Tyler Crook] skillfully details each panel as if his pen is directly connected to his brain. His water color work is the perfect choice for the material, invoking a feeling of that particularly dreamy world that could so easily create tie-in horror."--Svetlana Fedotov, Fangoria

Read the album
Pre-order
Added to your cart
Manor Black
(0)
$10.99
From the creators of Harrow County and The Sixth Gun comes this gothic horror fantasy about a family of sorcerers in crisis. Roman Black is the moribund patriarch of a family of powerful sorcerers. As his wicked and corrupt children fight over who will take the reins of Manor Black and representative of the black arts, Roman adopts a young mage who he gifts his powers to with the hope that someone good will take his place against the evil forces out to bring down his family and legacy. Collects Manor Black issues #1-4 and featuring a sketchbook section and pinup art by Jill Thompson, Dan Brereton, Eric Henderson, and Greg Smallwood.