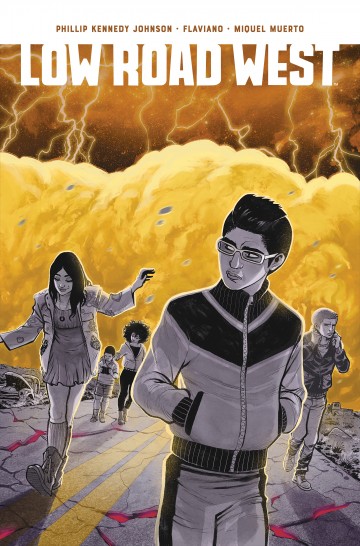 When five teenage refugees are stranded in an irradiated Oklahoma wasteland while trying to survive an exodus from the war-torn East Coast, they take shelter in a ghost town that is much more than it seems. The strange, unnatural threats they face there will make them question what they think they know about death, about reality, and especially about family as they learn to rely on each other if they’re ever going to make it to the sanctuary of San Francisco. Written by Eisner Award-nominated author Phillip Kennedy Johnson (The Power of the Dark Crystal, Aquaman) and illustrated by Ringo Award-nominated artist Flaviano (Thanos, Spider-Man/Deadpool), Low Road West is a story about coming of age in the throes of war, and carving your own path despite an uncertain future. Collects the complete 5-issue series.

This digital comic is available in english version. The following reading modes are available with the izneo reader:
Low Road West- Volume 1 - Low Road West - Phillip Kennedy Johnson - to read online on izneo or download on your iOS and Android tablet or smartphone.

Read the album
Add to cart
Added to your cart
V.5 - Low Road West
(0)
$3.99
Forced from the only refuge they have been able to find, the teenage refugees must face off once and for all against the enemy that surrounds them… and the enemy within them.

Read the album
Add to cart
Added to your cart
V.1 - Low Road West
(0)
$3.99
Become a super reader
Write reviews and get comics for free!

Read the album
Add to cart
Added to your cart
Red Sonja: Black, White, Red #4
(0)
$4.99
The greatest tales! The most amazing storytellers! Red Sonja, like you’ve NEVER seen before…all presented in beautiful black, white, and red! In this issue… -PHILLIP KENNEDY JOHNSON (Action Comics) and STEVE BEACH (The Last God) show a bloody life in full. A white-haired Queen Sonja prepares to lead her armies into what could be her final battle, the touch of now-unfamiliar steel brings back a flood of bloody memories, and returns to her the bloodlust that carried her to so many victories. -In SANYA ANWAR’s (Wonder Woman) tale, Sonja seeks shelter after a brutal battle in a foreign land. She will try to help someone in need, but discover that not everyone needs saving… -CHUCK BROWN (Bitter Root) and DREW MOSS (Vampirella/Red Sonja) present a Sonja bathed in fire, imbued with a purpose most glorious…