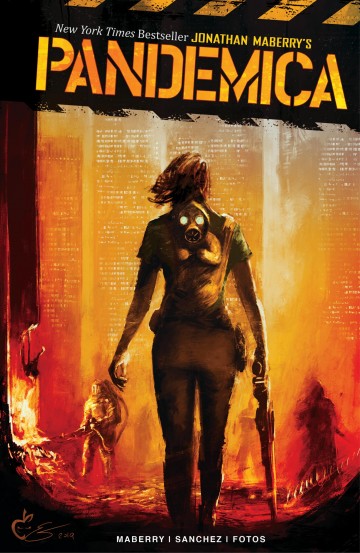 Join the resistance and save the world in this graphic novel from New York Times bestselling author Jonathan Maberry! War is brewing in America. A shadow government is preparing to launch "purity bombs" for ethnic cleansing, but there are things worse than death. Designer pandemics are colliding and mutating, pushing humanity to the edge of permanent darkness. One child holds the key to human survival, or extinction, and everyone is hunting for her, but a small group of scientists and former SpecOps shooters stand in their way.

This digital comic is available in english version. The following reading modes are available with the izneo reader:
BLACK FRIDAY IS HERE!
Thousands of volumes on sale!

Pandemica- Volume 1 - Pandemica - Jonathan Maberry - to read online on izneo or download on your iOS and Android tablet or smartphone.

Read the album
Add to cart
Added to your cart
Road of the Dead: Highway to Hell
(0)
$5.99 $2.99
The five-time Bram Stoker Award-winning author introduces the world to the latest chapter of the zombie epic in this over-the-top wild- ride prequel to ROAD OF THE DEAD! The dead rose and are feasting on the living and a young scientist may hold the secret to a cure. Meanwhile, zombies and biker gangs want her dead, so it’s up to a bunch of losers in muscle cars and a hijacked tank to risk everything to save her.