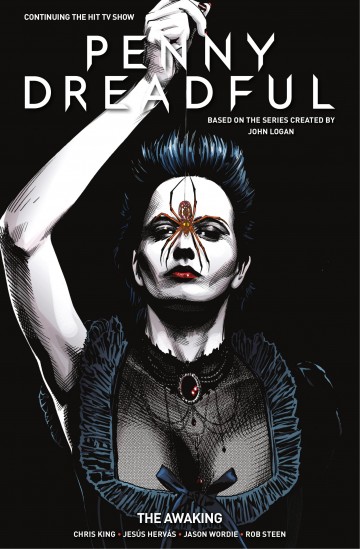 Continuing the hit TV series! Six months after Vanessa’s death, Ethan and Sir Malcolm still struggle to move on. As an ill wind blows over London, it soon seems that Vanessa’s death was only the beginning… and an even great danger is yet to come. The haunting story of the critically-acclaimed SHOWTIME TV series continues in this official sequel, written by the show’s co-producer, Chris King, and beautifully illustrated by Jesus Hervas (Sons of Anarchy) and colorist Jason Wordie. “Dark, menacing, delightfully detailed and unique.” – Graphic Policy “A successor on par with Showtime’s cult phenomenon.” – Diabolique Magazine

Read the album
Add to cart
Added to your cart
V.4 - Penny Dreadful
(0)
$3.99
On a train racing north, Cat, Frankenstein, Sedna, and Nanuq are battling the witches who have dogged their steps since the recent horrors erupted in London. With their last hope – their best hope – finally almost within reach, they forge onwards, desperate to find Dracula and the key to defeating the evil that sweeps the country. Lily alone is left to rescue Ethan from Lucifer, and despite her resourcefulness, despite her bravery, she is at the mercy of a foe whose true madness is yet to be fully revealed.

Read the album
Add to cart
Added to your cart
V.1 - C.5 - Penny Dreadful
(0)
$3.99
Harker has fallen under the spell of the Master, but Vanessa can see the benefit of such a fate. She implores Harker to lead them to their prey, in the hope that Mina will reveal herself, and his footsteps take them to the bloody opium den... and into a horrifying trap!

Read the album
Add to cart
Added to your cart
The Empty Man: Manifestation
(0)
$12.29
The Empty Man has gone viral -- not just pathologically, but also through the airwaves as cultists broadcast their “message” of indoctrination to all within range of a television. Agents Jensen & Marsh must escort the Kerry family outside the city limits, shielding them from quarantine crews and the cults looking to bring the infected Melissa into their ranks. Written by Eisner Award-nominated author Cullen Bunn (Harrow County, Bone Parish) and illustrated by artist Jesús Hervás (Lucas Stand), Manifestation is the third installment in The Empty Man franchise, bringing the haunting story of the Kerry family to a close.