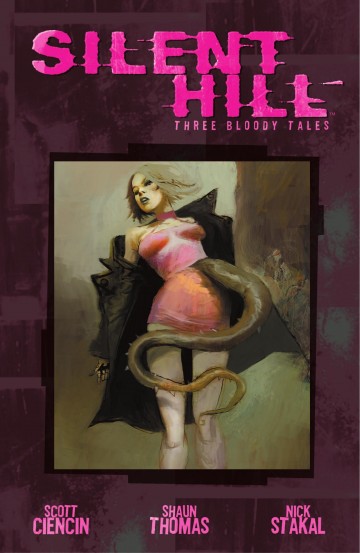 Read an excerpt
$6.89
Add to cart
Added to your cart
Included in the izneo Premium subscription
Learn more about izneo Premium

This blood-soaked volume collects IDW Publishing's three chilling one-shots based on Silent Hill, the smash-hit Konami videogame series. In "Among the Damned," a young, guilt-ridden soldier meets a doomed soul that will either change his life or end it. In "Paint It Black," a painter finds his dark muse in Silent Hill, until a group of cheerleaders arrive and the attacks begin. "The Grinning Man" tells the tale of the terrifying title character, who faces off against a State Trooper one day away from retirement.

Read the album
Add to cart
Added to your cart
Silent Hill - Dying Inside
(0)
$11.99
What would you sacrifice to gain absolute control over your own destiny? The lives and souls of those who love and trust you? The future? A war rages in the demon-infested town of Silent Hill, where seventeen year-old Goth Lauryn must make a decision that may forever alter the course of this unholy place-and one day loose Hell itself upon the world. Don't miss the incredible action and chilling terror of the miniseries' conclusion.