Jeremy Haun returns to his The Beauty roots as he teams with Danny Luckert, hot off Regression, for a new psychological horror series. After losing her eye and the man she loves in a brutal mugging, Daisy McDonough is left trying to put the pieces of her life back together. Just when she begins to think she can heal— move on, she begins to see strange things through her new prosthetic eye. And The Red Mother sees her in return. Continuing BOOM! Studios’ string of successes, The Red Mother follows Faithless, Once & Future, and Something is Killing the Children for a new original series that examines the dangers that hide in plain sight – and the consequences of digging beneath the surface to find the truth underneath. 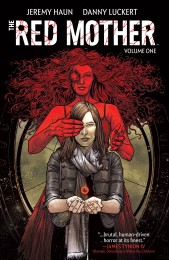 The last thing Daisy sees before she blacks out is her boyfriend being dragged away into the darkness. She wakes up in the hospital after the attack and learns that her eye was so badly damaged it had to be removed. When she gets a new prosthetic eye, Daisy starts to see terrifying flashes of red filled with things – and people – that aren’t there… Now Daisy must solve the mystery behind these visions as they begin to take control and drag her closer to something that she doesn’t understand…and may not be of this world. Writer Jeremy Haun (The Beauty, The Realm) and artist Danny Luckert (Regression) present The Red Mother, a creeping horror series that examines the dangers that hide in plain sight – and the consequences of digging beneath the surface to find the truth underneath.