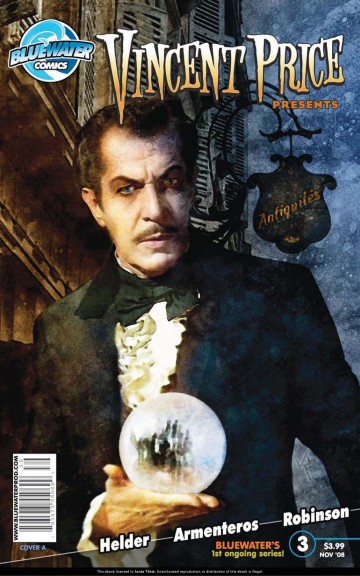 African-American physicist Andrew Routledge takes a plane flight in a blizzard to attend a world-class conference on quantum mechanics. Fate has other plans when his plane crashes in a nightmarish world where the snow never stops and a menacing evil curse, buried deep within the darkest chapters of American history, rises again! Andrew's only hope to escape is a strange whistle that he must figure out how to use before the snow stops forever and the apocalyptic Shadow Man appears on the horizon - signaling the doom of all!

Read the album
Add to cart
Added to your cart
V.10 - Vincent Price Presents
(0)
$11.99
Vincent Price is the master of the cult gothic horror films. In this graphic novel is the sequels to the classic films Witchfinder General, Last Man on Earth and Tingler.

Read the album
Add to cart
Added to your cart
C.37 - Vincent Price Presents
(0)
$3.99
In this special Centennial issue to commentate the 100th birthday of Vincent Price, will feature a special crossover with Dracula vs Vincent Price vs the Raven.

Read the album
Add to cart
Added to your cart
Vincent Price Presents #0
(0)
$3.99
Check out the series that started it all in this all new story featuring one of Mr Price's classics… Last Man on Earth. One of classic Hollywood's most famous scary men, Vincent Price made a name for himself in classic mysteries and thrillers throughout the 1940s, 50s and 60s. Now Vincent Price Presents comes to TidalWave Productions as their 1st ongoing monthly series. The series will feature some of Price's films as well as developing new frightening ones with his estate. Welcome back to the macabre world of Vincent Price.
Become a super reader
Write reviews and get comics for free!

Read the album
Add to cart
Added to your cart
C.2 - Bartholomew of the Scissors
(0)
$3.99
The horror continues this month as Gordon and Jessica penetrate deeper into the mystery of Bartholomew to learn about the origin of Bartholomew and the horrific Scissor Swarm. The uncanny psychic vision of the Fire Doppelganger reveals the horrific details of Bartholomew's abduction and murder. Unbeknownst to the investigators, Bartholomew is watching, and he doesn't appreciate the team probing into his past. Meanwhile, the White Blob gains strength and numbers.